Villains Wiki
Register
Don't have an account?
Sign In
Advertisement
in: Twin/Clone, The Simpsons Villains, TV Show Villains,
and 23 more

Homer's Clones are minor antagonists in The Simpsons, appearing as the main antagonists of '"The Simpsons Treehouse of Horror XIII". They are created via a magic hammock which Homer purchased after stupidly ignoring the warnings of it.

After creating the clones, Homer has them do his chores for him. At first it goes smoothly, and the clones do all the hard work, as the real Homer gets all the credit, and they don't do say anything about it, due to being TWICE the idiot than Homer himself.

Things starts going badly when Ned asks about borrowing the chainsaw that Homer apparently stole from Ned to begin with. But when one of the clones sees the chainsaw and misunderstands what Homer wanted done with it, the clone shows Homer the decapitated head of Ned Flanders, much to Homer's complete shock.

Terrified by Ned Flanders' death, Homer drives the idiotic clones to a corn field, shooting any that remembered the way to his house. Homer also leaves the hammock behind. But this proves to be a bad choice by him, and the clones use it to make an entire army of Homers.

In an attempt to stop the clones from overpopulating America, the government tricks them into falling off a cliff by riding helicopters attached with giant donuts. The plan was a success, but it later turns out that one of the clones remains behind to secretly live with the Simpson family while the real Homer was the first to fall off the cliff due to his obsession of donuts. Marge is terrified, but when the Homer clone gives her a back rub, she decides to live with it. 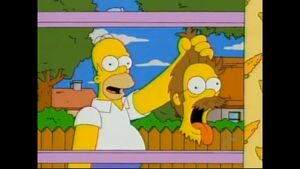 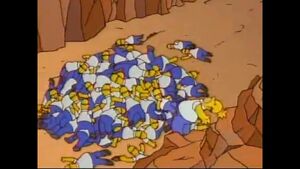