Don't be Afraid of the Dark

Can convert humans into Homunculi

Kidnap and convert humans who encountered them into their own. (accomplished in both versions of the movie)

The Homunculi, sometimes known as "Creatures" or also simply "Tooth Fairies", are a mythical race of small nocturnal fairy-like creatures from the netherworld and the main antagonists of the 1973 ABC made-for-TV horror film Don't Be Afraid of the Dark and the 2011 fantasy horror film of the same name.

It starts when Sally and her husband Alex inherited the mansion from her recently deceased grandmother shortly after she discovered a fireplace whom her grandmother put sealed for secret. Long time ago, Homunculi were released after Sally's grandparents had it opened, and one day Mrs. Bennett heard her husband scream as he was down in the room with the fireplace. But his body was never found and the gardner seals the entrance to prevent further incidents. When Sally, against the advice of the gardener who sealed the fireplace and her better judgment, opens the passage herself and what revealed thereafter was not a fireplace at all but a large, dark, deep sub-basement. As Sally leaves the den, several whispering voices are heard coming from behind the fireplace, calling her name, and proclaiming that "she set us free".

Later Sally become haunted by dark, goblin-like creatures which caused her husband and friends to worry about her health or did not believe her. Her clueless husband definitely does not help Sally's predicament at all. After streaks of stalking, torments, and one murder Homunculi, in a stroke of a strategist, managed to lock her alone and isolating out Sally's friend assigned to watch over her, putting sleeping pills in her coffee and severing electricity (Homunculi fear bright lights) in the room. Ultimately, Sally was taken by the goblins into the basement's fireplace. As it turns out, Sally somehow became one of the creatures, as her voice was heard telling the others to wait for their next victims.

8 year-old Sally's parents were divorced and her mother sent her to live with her father and his girlfriend Kim. While playing outside, Sally notices a basement window in garden, revealing a sealed basement. Harris, one of the workers who knows about the house's dark past warned the family against opening it, specifically stating "Its not safe for children."

Against his warning, the basement is opened. The Homunculi, having been awoken by Sally's carousel-styled nightlight which plays a lullaby tune, begin whispering to her. She finds that they are whispering from a bolted shut ashpit. Sally, thinking they want to be her friend, releases them.

Sally becomes hunted by the Homunculi. Her father does not believe her stories about them and worries about her health while Kim tried her best to be a good mother but the Homunculi framed Sally for ripping Kim's dress. Harris attempted to reseal the ashpit but was attacked and hospitalized. Harris later attempted to tell Kim about the houses dark secret and directed her to the library.

Kim learns about the truth through the disappearance of Lord Blackwood and his son as well as numerous paintings and texts made by Blackwood at the end of his life. 200 years ago when Lord Blackwood's son was taken by the homunculi, Blackwood pleaded for the return of his son by killing the maid and attempting to offer her to them in exchange before he was taken as well.

The Homunculi attempt to take Sally, but she is rescued by Kim. Homunculi then simply alter their plan of kidnapping Sally and take Kim down the ashpit instead. Sally breaks into tears and kills the Homunculi leader (formerly Lord Blackwood) in her rage. A few days later Alex and Sally visit the home, now in foreclosure, and Sally leaves a drawing for Kim. Kim has become a Homunculus as her own voice speaks with an echoing sinister tone among the voices of the demonic fairies that forever lurk and hide in the dark. 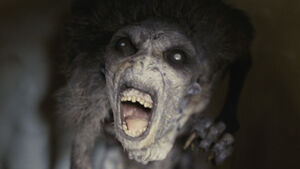 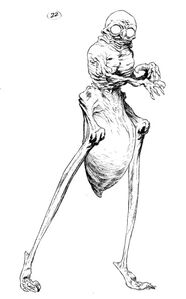 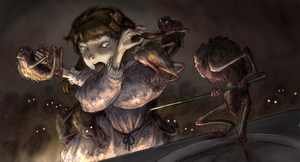 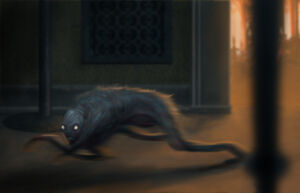 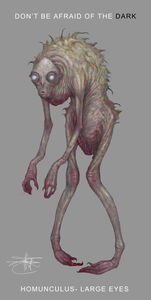 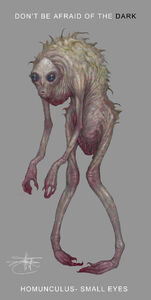 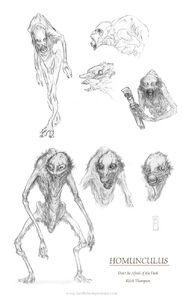 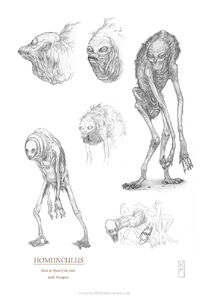 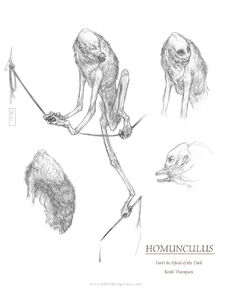 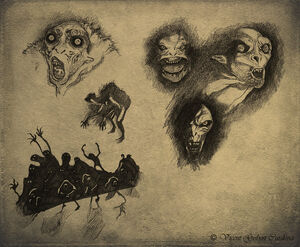 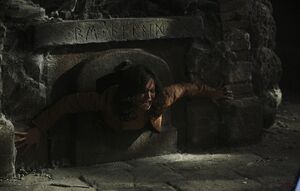 We prefer kids... But grown-ups will still do.
Add a photo to this gallery

Retrieved from "https://villains.fandom.com/wiki/Homunculi_(Don%27t_Be_Afraid_of_the_Dark)?oldid=3636393"
Community content is available under CC-BY-SA unless otherwise noted.