Head of the Ohnaka Gang (formerly)

Hondo Ohnaka is a villain and anti-hero from the Star Wars universe, appearing in the animated series Star Wars: The Clone Wars and Star Wars Rebels.

Despite being generally a good person, he served as the main antagonist of the Clone Wars episodes "Dooku Captured", "Gungan General", "Bounty Hunters", "A Test of Strength" and "Bound for Rescue" and also the secondary antagonist in the Star Wars Rebels episode "Brothers of the Broken Horn".

Hondo is a Weequay pirate who is the leader of a gang of Weequay pirates known as the Ohnaka Gang and he is identified by the green-tinted goggles and helmet he is wearing; he is also usually seen in the company of his pet monkey lizard, named Pilf Mukmuk. Even though Hondo is a pirate, he has a bit of a sense of honor to him and he has something of a passion for antiquities. He has also claimed that he has learned a lot of wisdoms from his mother and he even quoted her once.

Allied with neither faction in the war, Ohnaka and his pirates were an independent faction, with a base on the planet Florrum. Not under the attention of either faction, having never done anything to draw undue attention to themselves, the group and its leader had business dealings in both ransoming hostages and selling spice on the black market. Ohnaka also had a pet Kowakian monkey lizard named Pilf Mukmuk.

After Count Dooku, a Sith Lord and member of the Confederacy of Independent Systems, fled in a starship from the forces of the Republic in the Skirmish at Vanqor, he was shot down and crashed onto the surface of Vanqor. Ohnaka found Dooku fleeing from the Jedi Knights Anakin Skywalker and Obi-Wan Kenobi, and Ohnaka attempted to sell a passage off the planet to Dooku. Ohnakas offer was taken up on by Dooku, who agreed to pay in order to escape from Skywalker and Kenobi. As Skywalker and Kenobi wished to take him to the Republic for trial and imprisonment, Dooku claimed he was above material wealth and paid the price. Dooku also made sure to hide his lightsabers so as not to show his status as a Sith Lord and important figure within the Confederacy, which could make the pirates choose to hold him to ransom.

About two years later, Dooku sent General Grievous to Florum to confront Hondo. Grievous broke into Hondo's lair and locked him up while the Battle Droids pillaged the base. Hondo was then released by Ahsoka Tano and six young novices Jedi.

About three years later, Obi Wan Kenobi and Jedi Master Adi Gallia arrived on Florum in pursuit of Darth Maul and his brother Savage Opress AKA the Nightbrothers. He first became aware of thier presence when Maul called him and informed him that two of his three ship captains had turned against him, impaling the third in front of him. Hondo was worried by these "Horned Freaks" when Kenobi called and they agreed that Hondo would deal with his men if Kenobi and Gallia stopped the Nightbrothers. However, Hondo and his men took heavy losses and Master Gallia was outright killed by Savage, forcing him, his men, and Kenobi to retreat into the caves beneath his base. He set up a machine gun to deal with his men whilst Obi Wan led away the Nightbrothers, sealing the exit with his pistol and forcing his men to turn turncoat again at machine gun point.

They then rallied to steal treasure from the Nightbrothers' ship and went after it only for the Nightbrothers to come charging out for it after Savage had his arm cut off by Obi Wan. A prolonged firefight ensued, resulting in Hondo blasting off one of Maul's false feet but the Sith Lord collapsing a ship over onto the path before them, allowing them to escape into thier ship. However, Hondo had one of his pirates bring up a bazooka, shooting the ship in one of it's engines and forcing the ship to crash. Obi Wan and Hondo inspected the crash, with the latter taking what was left of the goods, and Hondo commenting that the destroyed goods should mean they were dead but Obi Wan doubted it. He proved right since the brothers had earlier ejected in an escape ship.

After the advent of the empire, Hondo lost all his band of pirates. Hondo then became a smuggler to live although the details of how he lost his crew are never revealed. It is however likely that they just saw him as pathetic and useless since his piracy had massively dropped since the attack by Grevious and especially after the Nightbrothers so moved on.

Brothers of the Broken Horn

In 4 BBY, Hondo flew a ship named Broken Horn and locked up its owner Cikatro Vizago in his own dungeon and then met a young Jedi apprentice named Ezra Bridger and his droid Chopper. Ezra asked or was Vizago and Hondo replied that he had won the ship at the Sabacc After introducing himself, Hondo asked Ezra his name, Ezra replied that he was Lando Calrissian. Hondo offered Ezra the chance to assist him in selling five power generators at extortion rates. In the end, the two partners agreed to split their profits and to give Ezra two of the power generators.

Hondo and his new-found partners traveled to the frigid planet Nixus where they planned to sell the power generators to an unknown buyer at Nixus Hub 218. Hondo and Ezra discovered that their buyer was the crime lord Azmorigan. Azmorigan aware of a premium on Hondo made him and Ezra prisoner. Azmorigan had them hoisted onto a loading dolly which would then catapult them into space. Hondo tried to make a walk with Azmorigan but Azmorigan replied that he would keep his credits, generators and eliminate Hondo as a bonus. Azmorigan recognized Ezra as one of the rebels he had met on Lothal and Hondo told him that it was his friend Lando Calrissian. Azmorigan replied that the boy was not Calrissian. Hondo annoyed by Ezra's lie before Azmorigan asked him why there were only four generators instead of five. Hondo replied that it was the droid who had the generator. And then Chopper attacked Azmorigan and his men to allow the Two to flee.

Hondo understood that Ezra was a Jedi and offered to become a Jedi pirate. Some time later, Ezra and Chopper discovered Vizago in the cells of the Broken Horn and together they confronted Ohnaka on the bridge. Ezra proposed that the two criminals split their profits and let him keep the generators, Hondo replied that it was a fair market and its disgusted then Vizago replied that he was of his opinion and reactivated his personal droid to attack Hondo and Ezra. In the fight, Hondo took the generator and ghost to flee but the autopilot drove him to Ghost in Garel City. The rebels allowed Hondo to keep his credits but seized the five power generators. As he left, Ezra told him that he had almost accepted his offer, Hondo replied with sympathy that he already considered Erza as a real Jedi.

Legends of the Lasat

In 3 BBY, Hondo contacted Ezra via a transmitter and told him to travel to Nixus Hub 218, where the Empire had captured two refugees. Ezra and the crew of the Ghost traveled to Nixus where they discovered that these two refugees were Lasat who had survived the fall of Lasan. After the rescue, Hondo introduced himself as Ezra's mysterious contact and revealed that he had also tipped off the Empire to the refugees' arrival knowing that the rebels would arrive to save the saved.

Hondo secretly sealed several of the doors, preventing many of the Stormtroopers from pursuing the rebels. Hondo's actions enabled the rebels to flee aboard the Ghost and escape into hyperspace. However, Hondo was not so lucky and he was captured by the Stormtroopers. Hondo was then forced to help the Agent Kallus hunt down the rebels.

In 2 BBY: Hondo was imprisoned by the Empire at the Imperial prison on Naraka. He shared his cell with the laborer Terba, who had been imprisoned for trying to escape the Imperial junkyard Reklam Station inside the planet Yarma. Reklam Station was being used to dismantle several decommissioned Republic starfighters including Y-wing starfighters. Seeking pecuniary reward and to escape the prison, Terba related the information to Hondo. Hondo then convinced the Spectres particularly his former one-time partner Ezra Bridger to rescue him in return for disclosing this valuable information.

Ezra and his fellow rebels staged a rescue and managed to evacuate Hondo but Terba found death. After his escape, Hondo accompanied the Spectres back to rebels base on Atollon. There, he tried to convince Hera to sell him the Ghost to joke. Hondo then reiterated his demand for a ship equipped with a hyperdrive, detachable cargo bay, shield generator, and a crew. In response, the Commander Sato reminded the pirate that he would be paid only if his information was useful. Hondo then informed the rebels about Reklam Station and the Y-wings being dismantled there.

After boarding the station, Hondo and the rebels encountered several Ugnaught laborers. While Ezra wanted to ignore them, Hondo spoke to the Ugnaughts and told them that he was Terba's friend and that the rebels had come to liberate them. Ezra then asked Hondo to convince Melch to shut down the conveyor belt. Following a skirmish with Imperial stormtroopers and dismantler droids, the rebels, Hondo and the Ugnaughts managed to steal five Y-wings. Hondo and the Ugnaughts followed Ezra to the command center but stopped to guard an Imperial landing craft in the hangar. After the station began to collapse, Hondo and his Ugnaught allies took the shuttle and fled offworld. Before leaving, Hondo contacted Ezra to thank him and his friends for rescuing him.

Honda made an alliance with Azmorigan to steal a treasure from an Imperial Cargo ship. The attempt turned to disaster and Hondo nearly all lost his crew. Hondo contacted Ezra again to seek help from rebels.

Once arrived at the Ghost, all the crew at Ezra keeps a cold look on Hondo especially Zeb who reminds him that he abandoned them on Reklam Station. When Azmorigan arrived and conflicts began, Hondo tried to calm the situation.

Once in the freighter, Hondo accompanied by Azmorigan, Ezra and Zeb discovered that Melch, one of Hondo's crew members had survived. Hondo admitted that he had contracted the rebels after losing his Ugnaught crew. Hondo managed to win Melch over by offering him a two percent share of the treasure.

After Hondo tried to load one of his treasures with Ezra's help, Zeb objected and reminded Hondo that the rebels got to load their weapons first. After Azmorigan disappeared and Zeb vanished while trying to find him, Ezra tried to ask Hondo for help but the Weequay pirate was more concerned about his share of the treasure. Hondo also told Ezra that Azmorigan was his business partner and acquaintance. Back aboard the Ghost, Hondo and Azmorigan fought over a chest only to discover a hidden Melch inside. While Hondo was disappointed at not getting his share of the treasure, he claimed to have learned the value of friendship. Hera then ordered Hondo and his associates to continue their conversation on their own ship. He was never seen again in the franchise after this point. 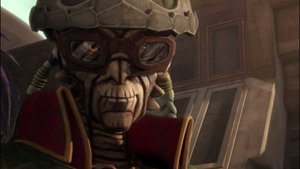 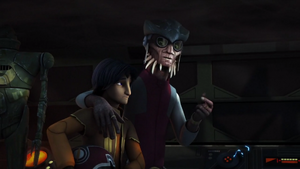 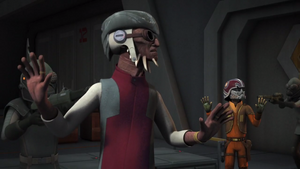 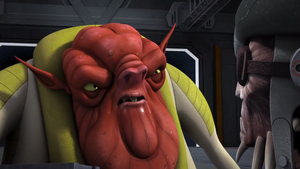 Azmorigan telling to Hondo that his partner is not Lando Calrissian. 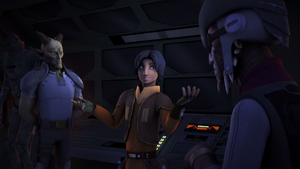 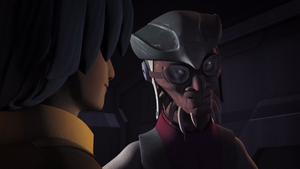 Hondo telling Ezra that in his eyes he is a Jedi. 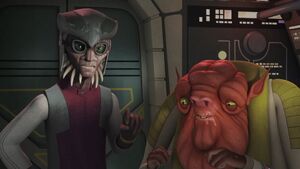 Hondo making an alliance with Azmorigan.
Add a photo to this gallery

Hondo Ohnaka at the Heroes wiki.

Retrieved from "https://villains.fandom.com/wiki/Hondo_Ohnaka?oldid=4019196"
Community content is available under CC-BY-SA unless otherwise noted.