Ruin the Lives of Children

Killer Clown
Honk is a one-time villain from Teen Titans Go!, appearing in the episode "The Return of Slade Wilson". He is a party clown that was captured and turned into a murderous killer clown, by Beast Boy and Cyborg.

In "The Return of Slade Wilson", The Teen Titans officially defeat Slade in an episode three-part battle plus a movie. To celebrate, they throw a huge party. Beast Boy and Cyborg invite a clown to the party for entertainment but nobody else at the party seems to enjoy that idea, given that they all think clowns are for kids. Beast Boy and Cyborg insist that clowns can be just as funny for adults as they are for kids and they plan to prove it to them when the clown comes in.

Honk the clown arrives at the party and puts on his act. Everyone is naturally dissatisfied, including Cyborg and Beast Boy. Instead of admitting that they've outgrown the clown, Cyborg and Beast Boy complain that the clown has changed since they were kids and it's not as funny as it used to be. Robin assures them that they've just let nostalgia cloud their memories and Raven tells them that clowns are just as funny as they used to be, only now that they're older, they've outgrown that kind of entertainment. Starfire is completely horrified by the clown, as she apparently has coulrophobia.

Beast Boy and Cyborg kidnap Honk and lock him up in a laboratory, where they make a bunch of scientific adjustments to him in order to make him more entertaining. Little do they know, they're turning him into someone that would only be funny for a group of edgy teenagers, rather than young children, Honk's actual target audience.

The next day, Cyborg and Beast Boy introduce to the Titans the new and improved Honk. They then unveil a horrifying murderous clown, with brutish muscles, sharp fangs, and weapons. This absolutely terrifies the already coulrophobic Starfire and gets Robin and Raven to rightfully call out Beast Boy and Cyborg on their horrible mutilation of a once innocent and lovable children's entertainer. Cyborg and Beast Boy tell them to wait and see what kinds of new jokes Honk has up his sleeve. Honk then goes completely berserk and starts ruthlessly beating the living snot out of Robin to the point, where he's aching and moaning in pain. Cyborg and Beast Boy laugh at this, as this is exactly the kind of dark comedy that would make a pair of teenagers like themselves laugh. Raven, on the other hand, tells them that they're both horrible people for messing with children's entertainment like this and tries to go on to explain how children won't see this as being actually funny. Rather, they'll find it horrifying. Before she can finish, Honk breaks out of the Titans Tower and flies off on a unicycle, to wreak havoc all over Jump City. The Titans think nothing of this and go about their days.

Honk goes around Jump City and ruins all other forms of children's entertainment. He edits the Pretty Pretty Pegasus show too turn it into a violent murder show and breaks into a toy store to turn all the toys into demonic death monsters with his evil water gun. Children run around screaming in terror as Honk watches and laughs. Cyborg and Beast Boy hear about this on the news and learn the error of their ways. The Teen Titans must band together to stop Honk before he ruins all of children's entertainment forever. Raven explains that the only way to turn him back to normal is to remind him of who he truly is. The only Titan who doesn't comply with this is Starfire, who is still too petrified in fear to fight.

The Teen Titans (sans Starfire) show up at the toy store, dressed as regular party clowns and put on a wacky show for Honk. Honk actually gets a good laugh out of their shtick, as he finds it entertaining. However, just when the Titans think they're getting through to him, he snaps back to his evil ways and gets ready to kill them. Honk corners them and is just about ready to blast them with his gun when Starfire bravely shows up and punches him in the face. Her one punch knocks him out cold, defeating him forever.

Before the transformation, Honk used to be a typical party clown. He was a Caucasian adult man, who wore white clown makeup with pink lipstick and eyeliner, a big red nose, and a green clown win. As clothing, he donned a purple shirt, comically oversized pink suspenders with yellow buttons and an orange patch, white gloves, yellow socks, gray shoes, a pink bowtie, and a yellow squirt flower.

After the transformation, Honk became a giant, muscular green clown with spikier green hair, sharp disgusting fangs, furry black angry eyebrows, and facial hair. He wore a ripped up brown vest with a white wifebeater underneath as well as dark black pants, held up with a skull belt, and large metallic, spiky shoes.

Honk used to be a normal guy, who worked the 9 to 5 job of being a clown who would entertain children at birthday parties and other special events. He made a decent living, had a well-paying job, and was great at not breaking character during performances, no matter what was happening at the time.

After Beast Boy and Cyborg reprogrammed him, Honk became a villainous, horrifying, psychopathic, murderous, child-hating ruffian, who acted like a hardened criminal. Honk ran around town and destroyed everything that children loved, by vandalizing it and remodeling it into horrifying, shocking garbage. Honk got a sick and sadistic thrill out of emotionally scarring innocent children with his inappropriate content. Despite this, he still had a morsel of his former self still left in there, as he was shown to laugh and be entertained by the Teen Titans' wacky, zany, goofy, and kid-friendly clown performance. Unfortunately, not enough to restore him to who he formerly was. 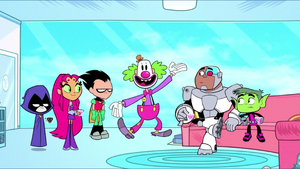 Honk entertaining the Titans at the party. 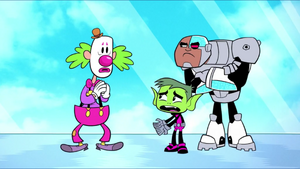 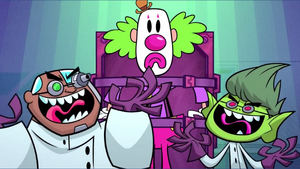 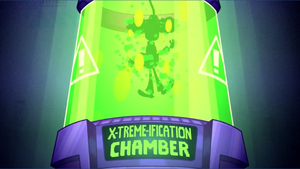 Honk being mutated in an "Extremification Chamber". 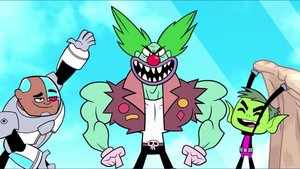 The introduction of Honk's new evil self. 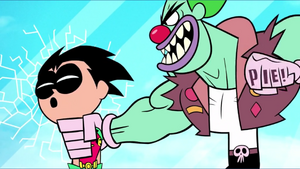 Honk giving Robin a pie in the face. 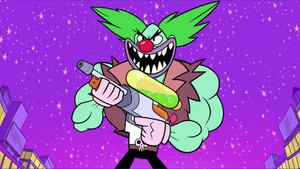 Honk with a water gun full of the same Extremification Acid he was mutated with. 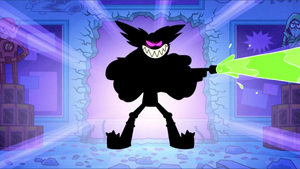 Honk's appearance in the audience of The Titans Show.