Collecting the bounty on the Dragon Hunters

The Honorable Bounty Hunter is the secondary antagonist in the Dragon Hunters episode For a Few Veggies More. He is the first bounty hunter to find and attack Gwizdo and Lian Chu after the Zimbranelle dwarves put a bounty on their heads.

He arrives at the Snoring Dragon Inn, demanding to know whether Gwizdo and Lian Chu are around. Gwizdo rushes to the man's side in the expectation to have a new employer. After he reveals his identity, the man draws his sword and orders Gwizdo to better surrender. He reveals that there is a bounty on Gwizdo's and Lian Chu's head. Gwizdo calls for help and Lian Chu rushes to his aid. Both men draw their swords and engage in a furious battle. Eventually, Jeanneline hears the rumor and screams at the fighters to continue their battles outside.

Lian Chu and the bounty hunter head outside, where they both walk towards the edge of the island to continue their battle there. While walking, the bounty hunter casually asks Lian Chu how the dragon hunting business is going. He continues to talk even at the edge and Lian Chu uses the man's distrection to push him over the cliff. The bounty hunter falls from the island, eventually landing on a small floating island underneath the inn. Back at the inn, the Dragon Hunters find out that the bounty on their head was cast by the Zimbranelle dwarves.

After the Wologangs' defeat, the bounty hunter goes his way. 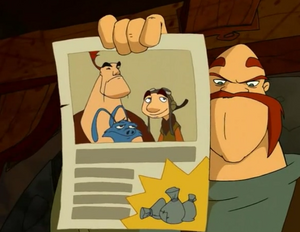 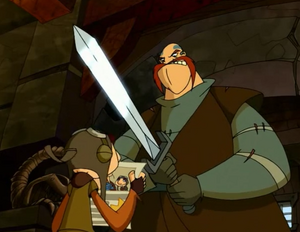 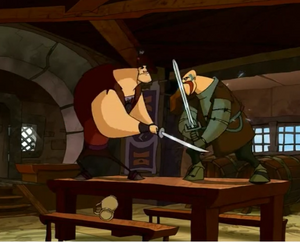 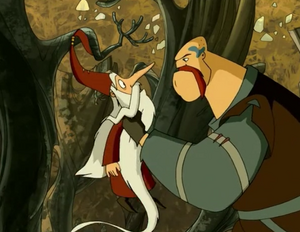 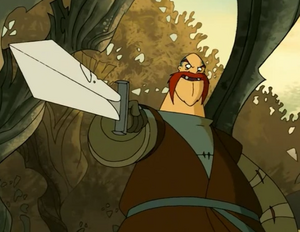 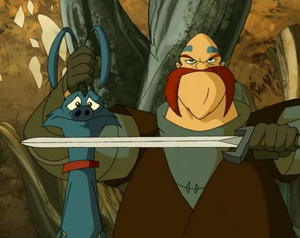 Add a photo to this gallery
Retrieved from "https://villains.fandom.com/wiki/Honorable_Bounty_Hunter?oldid=3537620"
Community content is available under CC-BY-SA unless otherwise noted.