Member of the League of Villains

Complete any tasks given and take down the current No.1 Pro Hero, Endeavor (failed).

Hood is a minor antagonist in the anime/manga series My Hero Academia, serving as the main antagonist of the Pro Hero Arc.

He was originally a ruffian from an underground fight club, but later found his way among the League of Villains and became the first of an advanced subspecies of the Nomus known as the High-End. He is also the first Nomu to display sentient intelligence and is capable of communication. He was given to Dabi by Daruma Ujiko and served as his personal Nomu, until he was killed in battle by Endeavor.

Hood is very unique among the Nomus in terms of appearance. While he displays similar features to other Nomus, such as muscular physiques, one of his noticeable features is his neck, which happens to be incredibly long and torn up, exposing muscle fibre. His skin at the top of his head appears to function as a hood of sort, the majority of his face, including his brain. He also appears to have large eyes similar to that of Kurogiri's.

Underneath his hood reveals a massive brain that serves as his top head with long, crooked teeth sticking out of the sides. He also appears to have disfigured pupils in his eyes.

While previous Nomus appear to be entirely mute and seemingly mindless, Hood is the first to display self awareness. He is capable of speaking full English, albeit in a stuttering tone. He appears to display a prideful side of him, wishing to take on the strongest there is. Combined with his superhuman capablities, he can come off being quite arrogant.

Hood is also surprisingly intelligent. He has shown to be quite strategic with his powers, as he spawned Nomus to keep the other Pro Heroes occupied and was able to note that Endeavor was getting weaker. He was also willing to tear his own head off in order to evade Endeavor's attack, then later land a strike once Endeavor was distracted. Because of this, this makes him incredibly dangerous.

Despite his newfound intelligence, Hood is no more different from previous Nomus. He is just as obedient as they are, willing to take orders given from his superior.

Hood was first seen given a task by Dabi to face off the current No. 1 Pro Hero, Endeavor. He later encounters the two Pro Heroes, Endeavor and Hawks in a restaurant. Crashing through, he demands for the strongest among the two, in which Endeavor blasts him out of the building, prepared to take him on.

Endeavor attempts to take him out with a powerful blast of his Hell Flame, but to his shock, Hood was able to survive and regenerate from the wound left behind, mocking Endeavor's attempt at killing him. Noting how different he is among other Nomus, Endeavor decides to capture him, but Hood was able to grab him and smash him through the building. He then proceeds to bring him around through the walls, eventually bringing down the top of the building and knocking civilians out. Both Hawks and Endeavor attempt to slice him once more, but Hood regenerates once, leaving a haunting smile on his face.

Hood is then caught off guard by a small duo of Pro Heroes. Hood proceeds to spawn out Nomus from himself, which then begin to attack nearby citizens and cause mayhem. While Hawks dispatches the spawned Nomus, Endeavor focuses on his next strategy, leaving Hood asking if he's going to fight or not. Hood eventually decides to make the first move once more, but Endeavor immediately burns his head off of his body. Despite this, Hood was still alive and was able to pierce through Endeavor's eye, leaving a massive wound. Hood stood above him, demanding for a much better challenge.

Hood continues to boast about wanting to challenge a stronger hero. Eventually, Endeavor awakens and attempts to strike down Hood, only for Hood to evade his attack then send him back flying through a couple of buildings. Hood continues rampaging through the city, observing the citizens that are attempting to evacuate. Hood eventually makes his move, but sees that he is being chased down by Endeavor. Hood attempts to knock him out of the air, but gets distracted by Hawks, who provides Endeavor aid by giving him his feathers, creating him flaming wings. Endeavor then charges towards Hood to land the final strike on him.

Once Endeavor lands the hit, he manages to punch through Hood's teeth and burn his insides. Hood continues to regenerate, but Endeavor continues to on, eventually finishing him off with a final Prominence Burn. Hood lands down to the ground burnt to a crisp, with Endeavor standing victorious.

Prior to the events of the Hero Billboard Chart JP, Hood was one of the various High-Ends seen being contained in Ujiko's lab.

Hood is overall a deadly villain and has demonstrated to be one of the most powerful villains among the League of Villains. His pure strength and regeneration alone is enough to overpower the likes of Endeavor and cause massive destruction.

Being a High-End Nomu, he is more powerful than the original Nomu and is most likely more dangerous than him, as Hood is able to think on his own and act rationally with his intelligence, wheres the original Nomu was more obedient and relied on others to speak for himself. Based on what he's demonstrated and what Endeavor has seen, he is said to have a total of six Quirks. 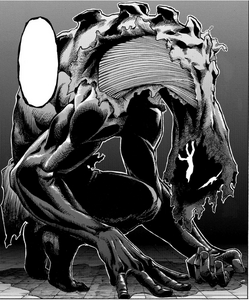 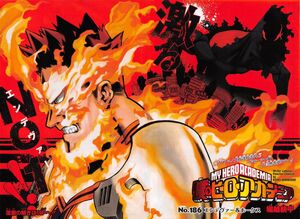 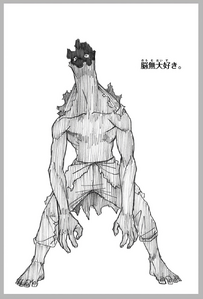 Retrieved from "https://villains.fandom.com/wiki/Hood_(My_Hero_Academia)?oldid=4267661"
Community content is available under CC-BY-SA unless otherwise noted.