The Perils of Penelope Pitstop

To kill Penelope in order to gain her fortune (failed)

Sylvester Sneekly, also known as the Hooded Claw, is the main antagonist of the Hanna-Barbera animated television show The Perils of Penelope Pitstop. The show was a spin-off of a prior cartoon Wacky Races featuring the show's characters Penelope Pitstop and the Anthill Mob, but with the Hooded Claw replacing Dick Dastardly and Muttley as the primary villain (ironically the two would've appeared as supporting antagonists in early plans).

The Hooded Claw was the disguise used by heiress Penelope's lawyer and supposed guardian, Sylvester Sneakly, in a continuing effort to do away with Penelope, in order to make her family fortune his own. Sneakly would use his dual role (cartoon logic ignoring a limited disguise for his face and none for his voice) to set Penelope up for his latest trap, always in a different part of the world and based on the sights and history of the region, as well as the old-time damsel-in-distress stories.

Aiding him in this were two dim hirelings, the identical twin Bully Brothers; it seems likely the Claw wanted someone he could easily cheat, should his schemes succeed, but failed to compensate for their foolishness. Another factor likely holding him back (but firmly in keeping with the genre) was the complicated and slow workings of his death-traps. Frequently, one trap led right into another, with little or no stop till the end of the episode.

The Anthill Mob acted as Penelope's protectors: as easily fooled and misled as Penelope herself, but smarter than the Bully Brothers; once, when their personalities were inverted, their schemes to do away with Penelope were nearly successful. Modeled after the Seven Dwarves, the Mob's members each had a signature trait that alternately aided Penelope, or got her, and them, in even deeper trouble, moments the Claw never hesitated to exploit. They were a determined, resourceful lot, and once they caught on to the Claw's inevitable involvement, they moved hard to save their pretty charge, who soon rescued them in return.

As the supposedly kind and caring Sylvester Sneakly, the Claw called his charge 'Penelope', while in disguise, he only referred to her as Pitstop. One joke by the Claw mentioned Dick Dastardly by name; possibly an indication that this show shared a world with Wacky Races and Dick Dastardly And His Flying Machines. Hanna-Barbera shows were known for this sort of humor, with Yogi Bear appearing on The Flinstones, and a classmate of Elroy Jetson's watching reruns of The Flintstones on a wristwatch-TV.

Sylvester Sneekly often gave hints to his true identity to Penelope, and once changed into the Hooded Claw costume  in front of her, but Penelope was unable to believe that the guardian she admired was the Hooded Claw, and dismissed the idea. 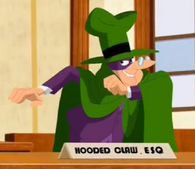 Sylvester Sneekly in Wacky Races (reboot)
Add a photo to this gallery
Retrieved from "https://villains.fandom.com/wiki/Hooded_Claw?oldid=4073016"
Community content is available under CC-BY-SA unless otherwise noted.