One night in the Glade of Dreams

Beneath the Summit Beyond the Clouds

The Hoodlums (also known as Dark Lums, the Hoodlum army, Black Lums, Cagoulards and Kagoulards) are the primary group of enemies in Rayman 3: Hoodlum Havoc and its sequel Rayman: Hoodlums' Revenge.

They were created by André, the first Black Lum, who turned Red Lums into Black Lums by touching them. Under their leader, the army start stealing the fur from Bontons and weave it into costumes for themselves.

There are various types of Hoodlums, with different strategies, weapons, and weaknesses. Some of them shoot with their guns, the others throw or carry garnets. They also move big boxes from place to place and guard some of their buildings. In their free time, the Hoodlums practice shooting targets with Rayman and Globox's heads, playing cards, sleeping, playing tennis with bombs and drinking plum juice.

When the Hoodlums are defeated, Black Lums fly, leaving empty clothes on the ground. After Rayman wins the fight again Reflux, he gets the Grimace, a power that turns Black Lums back into Red Lums which he can absorb for health. However, he has to beat the Hoodlums before doing it.

One night, a lonely Red Lum is frightened by Rayman's hands and becomes the Black Lum known as André. He starts turning Red Lums into Black Lums. His new army sew clothes, make weapons and build several buildings in Rayman's world. Their first big invasion is to break into the Fairy Council where the Heart of the World is kept. André hopes to use the energy of the Heart to create more powerful army then before, but is accidentally swallowed by Globox before reaching the Heart. The Hoodlums tried to free their leader until they are defeated by Rayman and turned back to Red Lums. Many of them also die during the explosion in Hoodlum Headquarters when the Horrible Machine blows up. The last Hoodlums are turned back during Rayman's final fight with Reflux.

In Rayman 3's sequel, some of André's evil spirit is still in Globox's stomach. André's spirit creates the new army of Hoodlums and Rayman with Globox have to fight them. Globox soon becomes possessed by André who transforms him into a clone of Reflux.

Note: This list contains only Hoodlums that appear in PC and PlayStastion versions of Rayman 3: Hoodlum Havoc. 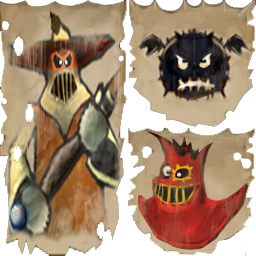 Retrieved from "https://villains.fandom.com/wiki/Hoodlums?oldid=4054255"
Community content is available under CC-BY-SA unless otherwise noted.