Supervillain
Hoodoo Guru is a one-time villain from the Nickelodeon animated series, SpongeBob SquarePants, only appearing in the episode "Swamp Mates". He is an evil voodoo-themed villain, known for being Mermaid Man and Barnacle Boy as shown by his obsession with collecting action figures from the show, usually by stealing them. He uses voodoo dolls of his opponents to control them against their will.

The Chief alerts the G.O.O.F.S. (Guild of Obsessive Fans) about Hoodoo Guru the voodoo villain, who has kidnapped Wonder Whale. Bubble Bass is especially angry about this and vows to defeat Hoodoo Guru and save Wonder Whale.

When Bubble Bass finally corners the mysterious figure, he falls into the villain's trap. The cloaked figure then reveals himself to be Hoodoo Guru and shows him the Wonder Whale action figure he stole. Hoodoo explains that he stole the action figure so that he could complete his collection of other stolen action figures.

Bubble Bass and Patrick find out the net they're trapped in is made out of spaghetti noodles and eat their way out, landing themselves on Hoodoo and crushing him. While Hoodoo lies there, incapacitated, Bubble Bass takes his action figure back. In retaliation, Hoodoo uses a voodoo doll of Patrick to control Patrick to make him attack Bubble Bass, knocking the Wonder Whale figure out of his hands and giving it back to Hoodoo. However, Hoodoo gets carried away with the voodoo doll and accidentally makes Patrick throw Bubble Bass back at him, knocking him out cold. Bubble Bass and Patrick escape with the Wonder Whale figure.

Bubble Bass sails the briny swamp, using Patrick as a raft but then Hoodoo reappears and starts chasing them, riding a boat with the Swamp Natives. Bubble Bass wards Hoodoo and the Natives off, saying that he and Patrick are armed with the power of reluctant friendship. Hoodoo and the Natives cower in fear and drive off. Bubble Bass thinks it was because of his threat, only to realize it was actually because they're approaching a waterfall. Bubble Bass and Patrick notice the waterfall all too late and they both plummet to their dooms. 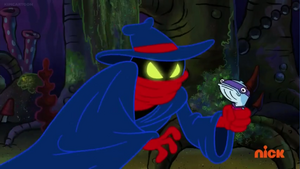 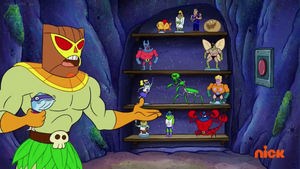 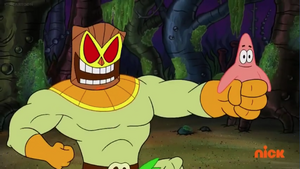 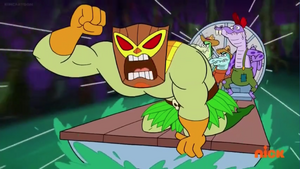 Add a photo to this gallery
Retrieved from "https://villains.fandom.com/wiki/Hoodoo_Guru?oldid=4303955"
Community content is available under CC-BY-SA unless otherwise noted.