Eating and terrorizing citizens and people who challenge her.

Eat everybody and everything in her sight.

Hooktail is a major antagonist in Paper Mario: The Thousand-Year Door, serving as the main antagonist of Chapter 1. She is an enormous red dragon who terrorizes the village of Petalburg and surrounding area, wanting to eat everything she possibly can. Her lair is at the top of a Castle named Hooktail Castle.

Hooktail appears as a giant traditional red dragon. She walks on four legs and has two small wings that she can use to fly around the world. She also has 3 small blackish tails in the shape of hooks. The top of her head has 3 hair-like features which coil up to yellowish ends that looks similar to flowers.

Hooktail seems to be quite arrogant of her size. Her first thought at the sight of Mario and his partners is that she would eat them rather than being afraid of the possibility that she might lose. She isn't honorable at all either, as she uses trickery and deception to continue fighting rather than conceding defeat. Hooktail hates crickets (frogs in the Japanese Version), as she ate one at some point in the past, and it caused her to get sick. This causes her to feel weak and nauseous whenever she hears the sound of one.

Hooktail was first seen early in Chapter 1 when Mario and Goombella see her fly over them to her castle. She is later explained by the Mayor of Petalburg, saying that she had one of the Crystal Stars. The Mayor allowed Mario and Goombella to go to Shwonk Fortress to gain the two keys needed to get into Hooktail Castle. After Mario does this, Mario and Goombella were about to step out of Petalburg when Koops confronts them, begging Mario to let him join his adventure as Koops wanted to avenge his father, who fell victim when trying to challenge Hooktail. Mario can deny his request, but will find out he needs Koops's ability to get into the castle. Later in the castle, they discover a skeleton who Koops believes is his father. Koops reads the note the skeleton has which gives a strong hint about Hooktail's weakness. Mario and Koops figure out though that the skeleton is actually that of Kolorado's father, who also failed to defeat Hooktail. When Mario confronts the dragon herself, Hooktail questions who they are and then decides to eat them, starting the battle.

After the battle, Koops begins to feel very happy that he was able to avenge his father until Hooktail coughs a blue shell up, which turns out to be Koops's father, Koopley, who was actually still alive. After a reunion, Koops's father gives Mario the Crystal Star, which he found inside of Hooktail's belly.

Much later in the game while in the Palace of Shadow, Mario finds Gloomtail, who immediately questions them. Mario's partner will mistake him for Hooktail and question why Hooktail was here since they defeated her. Gloomtail then realizes that Mario and his partners had defeated Hooktail. This angers Gloomtail, who vows to kill Mario and his partners to avenge his sister, but failed.

Hooktail appeared in Super Mario-Kun issue #32 of the series, the Paper Mario: The Thousand-Year Door issue. In it, she attacks Mario, Goombella and Koops. As this manga is based on the original Japanese game, she gets weakened by a frog's croak rather than a cricket's chirp.

Hooktail appears as a sticker in Super Smash Bros. Brawl, which increases resistance to fire-based attacks for any fighter. 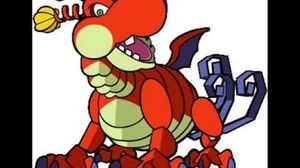 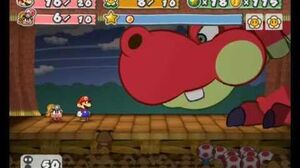