Pokémon the Movie: Hoopa and the Clash of Ages

Become the strongest Pokémon (as Unbound)

Hoopa Unbound, also known as Hoopa's Fury and Hoopa's Shadow is the main antagonist of the 18th Pokémon movie Pokémon: Hoopa and the Clash of Ages.

He was voiced by Kōichi Yamadera in the Japanese version, and by Ryan William Downey in the English dubbed version.

Hoopa was once the benevolent benefactor to the residents of Dahara City, who gave him food in exchange for wishes. The villagers then decided to test Hoopa's power by challenging him to Pokémon battles. But then one day, Hoopa got carried away and began summoning legendary Pokémon to further prove its strength, causing massive destruction. It was then that a traveling sorcerer named Ghris decided to use the power of Arceus to seal away Hoopa's power inside the Prison Bottle until he can learn to be more responsible with it.

Pokémon: Hoopa and the Clash of Ages

One hundred years later, one of Ghris's great-grandchildren, Barza, finds the Prison Bottle in order to restore Hoopa Confined, who had become a close friend to him and his sister, Mary, to his Unbound form. However, upon touching the bottle, Barza became possessed by the terrible fury that the power has built up over the century.

Meanwhile, Hoopa and Mary had become close friends with Ash and co. at a Pokémon Center in the desert. But then Barza appears and opens the bottle, restoring Hoopa Confined to his true power. At first, Hoopa Unbound revels in his returned strength, but then loses control and begins to rampage, forcing Mary to take the power back from him with the bottle. Clemont then builds a device to hold the bottle so no one would have to touch it.

Later on, however, Team Rocket steals the bottle hoping it would give them immense power, but then it possesses Meowth and makes him open it. Hoopa Confined fights off the power with the help of Barza and Mary, but then it becomes able to take its own shape, and worse yet, the bottle is destroyed. Hoopa Unbound then attempts to destroy Hoopa Confined in the effort to become the real Hoopa.

The siblings and Ash's friends attempt to make a new bottle at Dahara Tower while Ash protects Hoopa. Unfortunately, even with the help of the legendary Pokémon Hoopa Confined summons (Lugia, Mega Latios, Mega Latias, and Mega Shiny Rayquaza), they were still no match for Hoopa Unbound, especially when it summons its own legendaries (Primal Groudon, Primal Kyogre, Palkia, Dialga, Giratina, and Kyurem) under its control. But before Hoopa Unbound could crush them, Barza appears and successfully imprisons the power again. However, the bottle jumps out of his hand and Ash is forced to catch it, causing him to become possessed. The possessed Ash then demands for Hoopa to disappear, but Hoopa is able to calm the power down by sharing his happy memories with Barza and Mary, dissipating its rage once and for all.

However, the summoning of so many powerful Pokémon caused space and time to distort around Dahara Tower, causing it to crumble. However, Ash uses the bottle to restore Hoopa's power, allowing him to teleport everyone away before it was too late.

Hoopa Unbound appears in Super Smash Bros. Ultimate as a primary grab-type spirit with the ability to increase the player's tosses and meteor smashes. It can be created by enhancing the Hoopa Confined spirit at level 99. 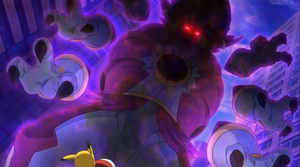 Hoopa Unbound in the movie.