Leader of the grasshoppers

Bossing the ants around, bossing the other grasshoppers around, and threatening Molt.

To keep the ants under his control as the grasshoppers' food suppliers.

Hopper is the main antagonist of A Bug's Life. He was the older brother of Molt and the former leader of the grasshoppers. He is voiced by Kevin Spacey.

At the beginning of the film, Flik accidentally destroyed the offering of food the ants prepared for the grasshoppers. Hopper was infuriated at this, but was willing to give the ants a second chance. However, after Flik stood up to Hopper, he doubled the order of food that the ants must prepare.

Sensing his fellow grasshoppers' reluctancy (due to a coming rain), he initially decides to forget about the food, but he recalled how Flik stood up to him. The others just laugh since it was only "one ant". Using their grain storage in a visual demonstration, he shows the other grasshoppers if one "puny" ant can stand up to them, soon all of them will. He then tells them it wasn't about the food, and that it was about keeping the ants in place.

When he was dissatisfied with the amount of offering the ants give him after a second chance (due to the ants not being able to give him any more food without starving themselves), he took over Ant Island and plotted to kill the Queen. After hearing from Dot about Hopper's plan, Flik and the circus troupe returned to the island and rescued the Queen, with the help of the fake bird that they made earlier in the season. Hopper had a fear of birds, but he soon discovered that the bird was a fake and tried to finish Flik, upon realizing that it was his idea after P.T. Flea who sets it on fire.

Flik made his heartfelt and assertive speech about how his colony is strong in number, and as a result, he and the ants stood up to him and bombarded him. Hopper was trapped in the circus cannon, at the time when it started to rain. Seeking revenge on Flik for embarrassing him, Hopper shot himself toward Flik and flew away with him. The circus bugs gave chase to save Flik and Heimlich commanded Rosie to fling Tuck and Roll at Hopper and she did so. Tuck and Roll jumped on Hopper and tried to stop him, only for the mad grasshopper to fly through a small hole to get them off of him.

As they watched him fly off with Flik, one of the brothers got mad at the other, only for the other to reveal he has ripped off Hopper's right antennae. Hopper notices this and gets angry and continues to fly off, only for Atta to intervene and swipe Flik away from him. After Flik and Atta had hid and Flik ran off to find Hopper (with Atta begging him not to), the grasshopper had finally caught up with Flik as he landed in front of him. He gets increasingly angry at Flik and tells him the fight is not over as he corners a scared Flik into a bird's nest. Flik begs Hopper not to finish him, but he ignores him and strangles Flik in an attempt to kill him and tells him next season, he will be back with more grasshoppers, but Flik will not.

Suddenly, the bird pops out of her nest and notices Flik and Hopper. Believing this to be another one of Flik's "bird tricks", Hopper teases the bird by greeting the "girls" in the bird's mouth until she shrieks at him. Realizing it is a real bird and that Flik had led him to a trap, Hopper screams in terror and tries to run away, only for the bird to block his path and quickly catch him in her beak. Then she flew Hopper over to her nest and fed him to her chicks (which Flik was visually disturbed by), ending his reign of terror on the ant colony.

Despite his death in the film, Hopper somehow reappeared in the short film.

Hopper was the only grasshopper who realized the ants outnumbered them 100 to 1. He realized that the ants are like simple-minded sheep, and can't really think for themselves, therefore taking advantage of them. In one event of the film, Hopper expresses concern that Flik stands up to him. Molt, Hopper's younger brother (who he had promised his mother not to kill on her deathbed), claims that they can just stay home and not go back since he doesn't even like rain.When he brings this idea up to his brother, Hopper nearly punches his brother out of anger towards the statement, until Molt says it was some other grasshoppers' idea (which isn't entirely true).

Hopper then confronts all the other grasshoppers and fakes approving of the plan then walks over to a water bottle full of grain. When brining up Flik and how he stood up to him, the grasshoppers, who convinced Molt to tell him they could stay, tell him that he's just one ant.  So Hopper pulls a grain out of the water bottle, tells the grasshopper to pretend it is a "puny little ant", then throws the grain at him, asking if it hurt. When the grasshopper said no, Hopper grabbed another grain and threw it at another grasshopper, asking if that one hurt and he said no. Then, Hopper proceeded to pull the lid of the water bottle full of grain, asking, "Well, how 'bout this?". The three grasshoppers were then covered in a torrent of grain, and were presumably crushed to death. Hopper explained what he meant: 1 ant can't hurt them, but they'd lose if all the ants stood up to them.

Hopper was more knowledgeable than the other grasshoppers, and also, by his manipulative and serious personality, was more of a leader. 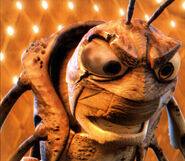 Add a photo to this gallery
Retrieved from "https://villains.fandom.com/wiki/Hopper?oldid=845485"
Community content is available under CC-BY-SA unless otherwise noted.