Villains Wiki
Register
Don't have an account?
Sign In
Advertisement
in: Elderly, Related to Hero, Egotist,
and 21 more

Running his own failing circus.

Claim the magical animal crackers for himself (briefly succeeded).

Horatio P. Huntington is the main antagonist of the 2017 film Animal Crackers.

He was voiced by Ian McKellen, who also played Magneto in the X-Men movie series, The Toad in Flushed Away, Kurt Dussander in Apt Pupil, King Richard III in the 1995 film adaptation of William Shakespeare’s Richard III, and Sir Leigh Teabing in The Da Vinci Code.

In 1962, brothers Bob and Horatio Huntington ran a traveling circus called the Huntington Brothers Circus, remaining on good terms despite carrying different ambitions. Horatio let the fame go to his head and outshining the other performers. During a performance in San Jose, California, their gypsy partner Esmerelda introduced them to her niece Talia. The two brothers were instantly infatuated by her, but Talia gradually ended up falling for Bob, slowly infuriating Horatio. When he found out about their engagement, Horatio told Bob to either choose between Talia or himself to spend his future with. Bob ultimately decided to stick to his heart and married Talia. On their wedding day, Esmerelda gave the couple a mysterious box as a gift, which allowed for them to open a new circus; Buffalo Bob's Rootin' Tootin' Animal Circus, known for their magical animals performing defying stunts.

Years later, Horatio, whose success had depleted since his split with Bob, began sneaking into Bob's circus at night, trying to find the secret to the magic animals. One night, he got into a scuffle with circus pets Old Blue the Bloodhound and Zena the cat when they discovered him, and accidentally started a fire that burned down part of the circus. Bob and Horatio's nephew Owen later learned that Bob and Talia died in the fire, and he and his wife Zoe, along with their daughter Mackenzie, attended their memorial service at the burnt down circus. Horatio made an unexpected visit at the service, announcing that he wass going take over the circus because of Bob's apparent "betrayal" for choosing Talia over him years before. He and his henchmen engaged a fight with the performers, causing Owen and his family to leave the service.

Before the Huntingtons left, Old Blue and Zena gave them the mysterious box that opened the circus. In the car, Owen discovered that the mysterious box holds animal crackers. During a stop, Owen inadvertently ate one of them and turned into a hamster. They learned from clown Chesterfield that the animal crackers were the secret to the circus; they'd turn the user into the animal they ate, and that it always remained full of an unlimited amount of animals, but with only one human cookie for each to change them back to their normal selves. Later, he told the couple they'd inherited the circus.

At the dog biscuit factory, fellow employee and egotistical saboteur Brock unwillingly took the animal cracker box, ate one of the cookies and turned into a mandrill. To catch up with Brock, Owen turned into a lion, but Brock fell out of a window, where Horatio's henchman Mario Zucchini stole the box before Owen came out and scared him away, forcing him to leave it behind and take an unconscious Brock in the process.

One night, during a circus performance, Horatio arrived with Owen's human cookie, offering to turn him back to normal as long as he gives him the circus. Owen refused, believing that he'd remain an animal as long as it would keep his family together. Angered, Horatio forced Owen into the deal, while also bringing in his henchmen, now mutated into animal hybrids from the broken pieces of animal crackers brought by Mario along with the human cookie previously.

The circus performers discovered Horatio's presence immediately afterwards and worked together to stop the henchmen, and gave Owen back the box. However, Horatio, dissatisfied with how they used the animal crackers, ate the remaining broken cookies he had and turned himself into a monstrous chimera. Old Blue and Zena then revealed themselves to be Bob and Talia; they explained that they escaped the fire, but their human cookies were destroyed, meaning they could never be human again. They asked Horatio to stop and redeem himself for his evil deeds. Horatio refused, and flies up into the air with them. Owen, Zoe, Mackenzie and the performers worked together to save Bob and Talia and captured Horatio and his henchmen, with Owen turning the former into a hamster as punishment. He was then locked in a cage, demanding to be let out. 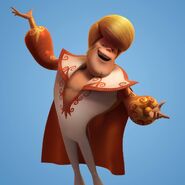 Horatio as a young man.

Horatio as a chimera.

Horatio as a hamster.