Hands can morph into cannons

Conquer the Galactic Alliance (both failed).

The Hornets are supporting antagonists of the Buzz Lightyear of Star Command cartoon series. They are bipedal robots serving as the Zurg Empire's staple military force under the leadership of Emperor Zurg. However, despite their outgrowing numbers in mass production, they are shown to be quite shoddy and expendable given to their poor design, and can be easily destroyed by Space Ranger laser fire, though they can be quite lethal and dangerous when they come in large numbers.

The Hornets first appeared in The Adventure Begins, where Zurg summons them to stop Buzz Lightyear and his partner Warp Darkmatter from rescuing several captive LGMs. Though Zurg escapes, Buzz and Warp manage to easily take down the Hornets while rescuing the LGMs, though Warp ends up being seemingly killed in an explosion, much to Buzz's dismay.

When the Brain Pods inform Zurg that the LGMs are connected to Uni-Mind (a mystical orb that enables all LGMs to feel and think as a collective whole), Zurg decides to utilize the Uni-Mind by kidnapping more of the LGMs in order to take control of every innocent mind in the Galactic Alliance. To that end, he sends in his right-hand Agent Z and more Hornets to steal the Uni-Mind. Though the Hornets end up being destroyed by Buzz and his new team of recruits (Mira, Booster, and XR), this allows Agent Z to steal the Uni-Mind and capture Buzz.

As Buzz is taken prisoner by two Hornets, he is shocked to realize that Agent Z is actually Warp, having faked his death to sever his ties with Star Command, as he had been under Zurg's payroll all the time.

Zurg had the Brain Pods and Grubs to work on giant ray gun that will manipulate the Uni-Mind's powers and the entire Galactic Alliance to his own will. As a treat, Zurg orders the two Hornets to have Buzz as a test subject, but Buzz's team arrives to the rescue and takes down many more of the Hornets before Buzz uses his sense of justice and virtue to free the Uni-Mind from Zurg's control, thus leaving Zurg and his army's plans for conquest in vain.

Hornets are yellow, bipedal machines with insectoid-like features, befitting their namesake. Their hands can morph into triple-barrel laser cannons, which serve as their main weaponry. They are also capable of flight.

In addition to being used as foot soldiers and cannon fodder, Hornets are sometimes used by Zurg as infiltrators and spies.

Individually or in small groups, Hornets are quite easy to defeat due to their fragile build. A single blast from a Space Ranger's wrist laser will destroy a Hornet instantly. In some cases, Space Rangers have beaten Hornets using hand-to-hand combat alone. Also, due to their limited intelligence, Hornets can be easily fooled or distracted. Only in large groups do Hornets actually pose a real danger.

As their name suggests, Mini Hornets are little versions of the original Hornets. They appear to be very similar to regular Hornets, except they are much smaller, and they have a slightly different build.

After NOS-4 A2 bites some Hornets, they are changed into energy vampire versions of themselves. They gain mouths with fangs, dark blue capes, blue sharp-pointed torsos as well laser-proof hide. 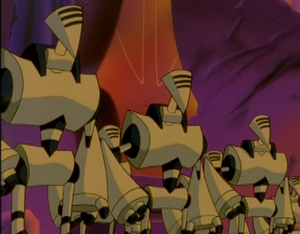 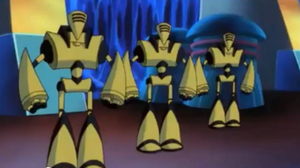 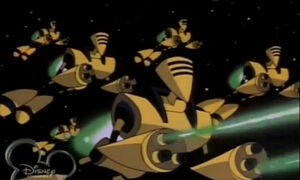 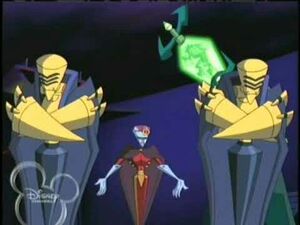 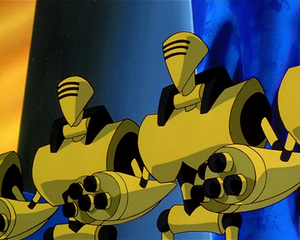