Have a new guest to entertain (Jibblies 2; succeeded).

The Horrible Painting (also known as The Rocoulm, as seen on a tarot card in Jibblies 2) is an entity residing in the House of Strong and one of the few things Strong Bad fears in the Homestar Runner webseries.

The Horrible Painting is an enigmatic object that is normally found in Strong Mad's closet. It makes its debut in the Strong Bad email "bottom 10" as the holder of the ninth spot on the list. In his demonstration, the Horrible Painting creepily murmurs "Come on in heeeeere..." as a spiraling green aura projects from its mouth. Exposure to this drives Strong Bad into a short fit of fear where he convulses and utters "Jibblie" repeatedly until the effect wears off.

Not much else is known about the Horrible Painting aside from some physical attributes, such as how it is always carrying a lit torch for reasons unknown. However, its role in Jibblies 2 provides further information about the creature.

The Horrible Painting serves as the villain of the 2007 Halloween special Jibblies 2. Managing to escape from being imprisoned inside Strong Mad's closet, it attacks Strong Mad with its usual disturbing aura, leaving Strong Mad a shaking figure calling "Jibblie". It affects other cast members with the same process, even managing to reduce Marzipan to a fear-stricken state over the phone. It also demonstrates the ability to move freely, as it is shown reducing other characters into fearful fits by appearing in places like Coach Z's shower room and in the brickwork of the King of Town's castle. (In a humorous Easter Egg, it tells Homsar to "Come on in heeeere", only to then be scared off by Homsar's unusual response.)

Eventually, only Strong Bad and Homestar are left until the Horrible Painting sneaks up on Strong Bad and drives him into a fearful fit. Being oblivious, Homestar is immune to the effects of the Painting's calls and literally steps into the world of the painting. The Horrible Painting reveals that it only wants a guest to entertain and uses its abilities to heal everyone from their fearful fits when Homestar promises to remain as its guest for an eternity. (The creature also reveals a bit of a hypocritical side when it dismisses the dancing Goblin, a recurring Halloween special character, as "having serious problems" after it's essentially assaulted all of the residents of Free Country, USA.) At some point, Homestar is freed due to his (obvious) later appearances. The Horrible Painting continues its habit of scaring others in its usual way, suggesting that it is either looking for another guest to entertain or that it is simply continuing to be scary as before.

In a teaser for the following year's Halloween special, Most in the Graveyard, the Horrible Painting appears behind the word "Sometime" of "Halloween Toon Sometime This Week!" It utters its usual phrase, scaring off the W of "Week!" and leaving behind a comical "eek!" in its wake.

The Horrible Painting makes appearances in the Telltale Strong Bad's Cool Game for Attractive People series. In Baddest of the Bands, the player can make Strong Bad uncover the Painting as an Easter Egg in a manner akin to its appearance in "bottom 10". In another Easter Egg of 8-Bit is Enough, Strong Bad attempts the "Bloody Mary" ritual in the bathroom mirror, only to instead draw out the Horrible Painting as it pops out of nowhere to scare him.

During some fan costume commentary, the painting meets Mr. Poofers and attempts to jibblify him, but is unable to get his catchphrase out before Mr. Poofers causes him to act on the dog's will. 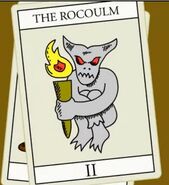 Homestar in its home realm.