Each mutants possess their own various superpowers

Aid Apocalypse in recreating the world in Apocalypse' image.

Purge the weak and the inferior.

Many members of the Horsemen of Apocalypse were brainwashed or enslaved and included some of Marvel's most prominent heroes: they would break free but some of the Horsemen served willingly and were supervillains in their own right.

Sometime during the 15th century, Apocalypse had already created his Horsemen and rode among them as well, leading an army of followers known as The Riders of the Dark. This army was so strong and powerful that some were led to believe that they were just a myth to scare soldiers before their first battle. During 1459, in Romania, the Horsemen of War led the Riders of the Dark, and single-handedly defeated the pre-vampire Dracula's army as well as Dracula himself.

The first modern Horseman recruited by Apocalypse was Plague, a member of the Morlocks, whom he recruited during the Mutant Massacre to fill the role of Pestilence. He then approached ex-soldier Abraham Kieros and granted him the position of War. Autumn Rolfson was Apocalypse's third choice and was given the position of Famine. Apocalypse then saved the dewinged Angel from his sabotaged, exploding plane and chose him to be his fourth and final Horseman, Death.

The Four Horsemen were forced to battle one another for leadership, and Death emerged victorious. In a battle against X-Factor, the Horsemen were nearly defeated until Death appeared, shocking his former comrades. Caliban went to Apocalypse and asked for a power boost so he could avenge his fellow Morlocks. Pestilence was slain in the battle and Archangel came back to his senses after assuming he killed his former comrade, Iceman. Apocalypse was forced to retreat with his remaining Horsemen and Caliban.

Caliban replaced Angel on the team and became Death. He captured Cyclops and Jean Grey and took them to Mister Sinister. The X-Men tracked him down and defeated Caliban and Famine and then realized the Horsemen were under Mr Sinister's orders. The X-Men were later defeated by Apocalypse. Caliban battled Sabretooth for revenge and lost the battle, his intelligence was reduced to that of a child.

After a battle with the X-Men in their mansion, Hulk was discovered by Apocalypse and became his second incarnation of War. Apocalypse set him against the Juggernaut to test his strength. Hulk was able to knock back Juggernaut with the huge celestial energy boost that Apocalypse had given him. He was also able to best the Absorbing Man but came to his senses when he thought he had injured his friend, Rick Jones.

For his second team of Horsemen, Apocalypse had Wolverine abducted, replacing him with a Skrull imposter to prevent his absence being noted, and pitched him in battle against Sabretooth. The winner of the battle, Wolverine', became his Horseman of Death. Wolverine as Death, battled the X-Men and killed the imposter Wolverine. Apocalypse then turned Deathbird into his second Horseman, War. Caliban was once again chosen to be one of Apocalypse's Horsemen, this time becoming Pestilence. Pestilence and War fought X-Force and captured Cable. In a battle against the X-Men, Death was unmasked and revealed to be Wolverine.

In Apocalypse's lair, Cable escaped and defeated Death in battle. Apocalypse then threatened to kill Caliban. Apocalypse captured Rory Campbell and turned him into his fourth Horseman, Famine. The Horsemen then started collecting "The Twelve". When Death captured Mikhail Rasputin and failed to teleport out with him, he was chased into the Morlock Tunnels by the X-Men. He battled them and regained his memory, thanks to the efforts of Jubilee, Shadowcat, Archangel and Psylocke. The rest of the Horsemen were teleported to another dimension by Mikhael.

Following the House of M and M-Day, Apocalypse resurrected, only to find himself in a world with its mutant population reduced to a tenth of what it had been, out of the millions who populated Earth prior to his demise at Cable's hands. Bent on becoming the new messiah for mutantkind, Apocalypse assembled a new cadre of Horsemen, with the purpose of wiping out 90% of the baseline human population.

Apocalypse's new Horsemen are Gazer (as War), Sunfire (as Famine), Polaris (as Pestilence) and Gambit (as Death). Gazer was saved from death and forced to battle an archaeologist for the mantle of War, which he won with the aid of Apocalypse's majordomo and scribe, Ozymandias. Both Sunfire, who had lost his legs at the hands of Lady Deathstrike and his powers to Rogue and Polaris, an M-Day victim, were captured, and reluctantly altered into Famine and Pestilence, respectively. Gambit, however, submitted himself willingly to be transformed into Death, as he had come to believe Apocalypse could be helpful to the mutant cause though he would require to be watched. Sunfire was able to break free of Apocalypse's control with the help of Emma Frost, although he was weakened by the experience. Polaris was knocked out by Iceman in the final battle. She was abandoned, saved by Havok, and was de-brainwashed by the X-Men. Gazer died defending Apocalypse, stabbed in the back by Ozymandias. Gambit's fate has yet to be seen; Sunfire took him somewhere at the conclusion of the final battle, only to be approached by Mister Sinister.

It was later revealed that Apocalypse had even prepared a contingency plan in case of an ultimate failure. Beginning as far back as 281 A.D., Apocalypse and Ozymandias had been recruiting members for the Final Horsemen. The point of these Horsemen were not immediate, rather, they were to be called upon if all else had failed. Chose Decimus Furius of Rome as War, Ichisumi of Japan as Pestilence, Jeb Lee of America as Famine, and Sanjar Javeed of Persia as Death. The Horsemen's first test was to protect a recently revived Apocalypse from X-Force.

The Four Horsemen of Apocalypse were founded in ancient times during the days of ancient Egypt. The original four were chosen as personal warriors and soldiers for Apocalypse and his plan for mutant domination. The Horsemen accompanied him and followed him as his first followers before thousands would worship Apocalypse.

The Four Horsemen appear at the after-credits scene of X-Men: Days of Future Past as they are seen on horses watching as their master Apocalypse creates pyramids amid crowds of worshipers chanting his name.

The Four Horsemen served as the secondary antagonists to the 2016 superhero film X-Men: Apocalypse. They are a team of powerful and godlike warriors who are the servants and followers of the godlike mutant, Apocalypse, and they seek to rebuild a new world in his image.

Around 3,000 B.C. in the giant pyramid within ancient Cairo where Apocalypse was ready to transfer himself into another body as his healing factor (like Wolverine's) could help him regenerate wounds and granted him near-immortality. Apocalypse arrived and the ceremony which is anticipated by his faithful cult known as Ashir En Sabah Nur, began with the horsemen protecting him but, mercenaries from outside alongside defecting cult members destroyed the pyramids and three of the horsemen were killed leaving only one to protect Apocalypse. The transfer was complete but the final Horsemen was killed and Apocalypse layed dormant for thousands of years.

After thousands of years have passed, Apocalypse finally awakens in the year 1983 and begins to reassemble his new horsemen once more. He first travels through Cairo and recruits the mutant Storm where he turns her hair white and grants her more power over nature. Next, Apocalypse travels with Storm to East Berlin where they run into Psylocke and recruit her after powering her up. Next, they all fly to Britain where the mutant Angel is granted metal wings and is turned into Archangel and is recruited as the third horsemen.

Finally, the horsemen and Apocalypse travel to Poland and recruit Erik Lehnsherr where he is preparing to kill a room full of men who reported him to Polish authorities and had his wife and daughter killed. Apocalypse summons and kills the men and eventually convinces Erik to join as Magneto after he destroys Auschwitz as revenge for his parents' death. The Horsemen are now assembled and follow Apocalypse as he seeks to destroy human civilization and build a new one.

With his new team complete, Apocalypse proceeded with his plot by having Magneto to control Earth's magnetic poles, causing destruction around the planet. He even got himself to possess Charles Xavier to bring every human under his control. However, Magneto and Storm decided to turn against Apocalypse by aiding the X-Men while Angel is killed in a plane crash. While Psylocke escapes, Magneto and Storm aided Dark Phoenix, who used her powers to destroy Apocalypse for good, thus saving the Earth.

As such, the Horsemen are officially disbanded following Apocalypse's death.

The Horses of Apocalypse 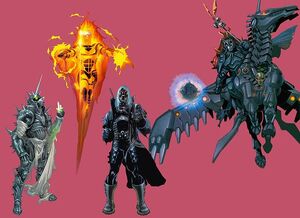 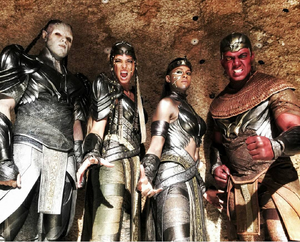 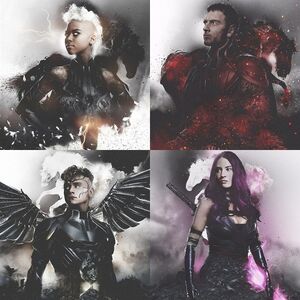