Owner of the Borsodi auctionhouse

Wealthy, has influence and powerful contacts

Preventing his brother Ewald from stealing their father's testament

No information
Horst Borsodi is a character in the Witcher 3: Wild Hunt expansion Hearts of Stone. He crosses the path of Geralt during the latter's search for Max Borsodi's House and, depending on the player's choice, can serve as the main antagonist of this story arc.

He was voiced by Paul Dodds.

Horst and his older brother Ewald were born into the wealthy Borsodi family. In his will, their father left the Borsodi's auction house to Ewald. However, Horst decided that Ewald was unfit to continue their father's business as he spent all the money they earned for prostitutes and alcohol. Horst cheated his brother and took the auction house for himself. Ewald was cast into the streets without money. For fifteen years, he had to live in the sewers of Novigrad as a beggar.

Years later, Horst moved the auction house from Novigrad to Oxenfurt as King Radovid had promised him not to collect any taxes.

When Geralt is tasked by Olgierd von Everec to find and bring him Max Borsodi's House, Gaunter O'Dimm tells him to start searching at the Borsodi auction house at Oxenfurt. Arriving there, Geralt manages to get into the auction with help from Vimme Vivaldi. Vimme introduces him to Horst who behaves arrogantly and is mortified when Geralt mentions Max Borsodi's House. He rages and demands to know who told Geralt about the house. He then has two guards bring Geralt outside. Once the men have lead Geralt from the auction house they attack him on Horst's orders. After defeating the guards, Geralt is approached by a cloaked stranger. Horsts watches the conversation through a window at the auction house.

Later, when Geralt and the Stranger break into the auction house they are caught by guards. One of the guards manages to sound a bell and more guards are alerted. Horst storms into the room and, seing the chaos and the battle, flees and locks himself up in the vault. However, the vault is breached by Geralt and the stranger who reveals himself as Ewald Borsodi who had planned to steal his father's will from the vault to be able to expose Horst as a cheater.

Both brother's then ask Geralt to help them defeat the other brother. It is up to the player whether he sides with Horst or Ewald.

Together with Geralt, Ewald kills Horst's men and defeats his brother. Lying on the ground, Horst begs Ewald to spare his life. Ewald agrees on the condition that Horst signs over everything he owns to Geralt and leaves with only the clothes he's wearing. Horst asks Ewald to allow him something from the vaul as a means to start a new life. This pushes Ewald, who due to Horst's scheming had to life as a beggar for fifteen years, over the edge and he takes a golden paperweight and walks towards Horst. Horst, believing that Ewald wants to give it to him, opens his hand but Ewald attacks him and brutally beats him with the paperweight. Geralt grabs Ewald by the arm to prevent him from killing his brother and, seemingly calmed, Ewald drops the paperweight. However, once Geralt turns around Ewald quickly grabs it again and smashes it into Horst's mouth, killing him much to Geralt's displeasure.

Should Geralt side with Horst, he fights Ewald and manages to knock him down. Horst then mocks Ewald that even his accomplices have turned against him. He then reveals to Ewald that he is willing to forgive him if Ewald recognizes him as head of the family. Ewald seemingly agrees but then draws a knife. Horst easily disarms him and starts beating him. Geralt intervenes and grabs Horst by the arm to prevent him from killing his brother and, seemingly calmed, Horst stops. However, once Geralt turns around Horst quickly grabs Ewald's dagger and rams it into Ewald's chest, killing him much to Geralt's displeasure.

After Ewald's death, Horst offers Geralt to take anything from the chamber but the House as it contains important papers, including the testament of his father. Geralt can either strike a deal with Horst, taking the House but leaving the papers, or fight Horst and kill him to take both the House and the papers.

Horst Borsodi, owner of the most famous auction house in all the North, was a snob and a buffoon. He looked down his nose at Geralt from the very moment they met, and when he heard what had brought the witcher to him, he had his men toss him out and beat him. To say their relationship got started off on the wrong foot would thus be putting it very lightly indeed...
If Geralt stand with Ewald:
It came as no surprise, then, when Geralt chose to stand by his partner, Ewald, in the final showdown between the two brothers. With their strength combined, they defeated Horst's hired muscle. A few moments later, Ewald killed his hated brother in a spectacularly cruel fashion. It was later said none walked behind the once rich and mighty Horst Borsodi's casket and none shed a tear over his grave...
If Geralt stand with Horst:
Nevertheless, when the Borsodi brothers faced off in a final showdown,Geralt chose to stand by Horst. He never revealed why he made this decision – perhaps he considered a pompous buffoon less of an evil than a bloodthirsty cheat, which is what his erstwhile partner, Ewald, had proven to be. With Geralt's support, Horst managed to defeat Ewald. He repaid the witcher for this by giving him the ornamented box known as Maximilian's House. 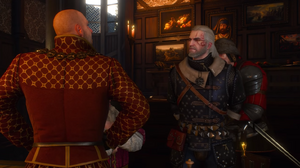 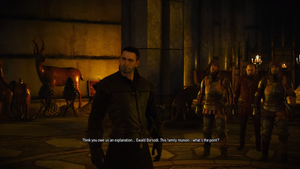 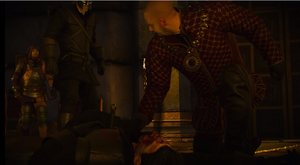 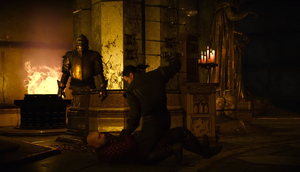 Horst is killed by his brother 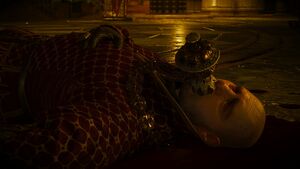