Artificial Intelligence
The Hostile Program is a minor villain in the video game; Kingdom Hearts II. It's a computer program created by the MCP while Sora was in Space Paranoids.

The Hostile Program appears on a Power attack medal that was available through a Weekly Jewel Extravaganza quest from January 27, 2020 to February 3, 2020. 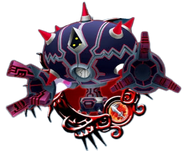