God of Order (in his Mortal Kombat: Armageddon ending)
Member of the Forces of Darkness

Spread his laws and orders through all realms.

He was voiced by Paul St. Peter in Mortal Kombat: Deception.

Hotaru can be described as an extremist and a very lawful person. He believed that law and order are the main necessities to all nature, and this in law and order were very strong to the point where he would severely punish anyone who were rebellious to his belief. He is also devoted to the service of Onaga.

In the story, Shujinko seeks help from Hotaru to battle against the Tarkatans in a small town of Outworld. As Hotaru helped, Shujinko returned on his quest with Damashi (actually Onaga). After a long journey, Shujinko decided to return to Outworld. As he encountered Hotaru, he was falsely imprisoned for a long period of time. As Shujinko broke free, he challenged Hotaru and other Seidan forces and escaped.

Upon the Dragon King's return Hotaru saw an opportunity to bring order to not just Orderrealm but all the realms. Joining Onaga he helped the Dragon King in his plans to remake the realms through assisting the Tarkatan hordes as they hunted down all who could stand in their way. In his non-canon ending Hotaru executes Sub-Zero to make an example of any who would oppose his lord.

When the battle of Armageddon started, Hotaru joined the Forces of Darkness in hopes of securing the godlike power for himself. As the battle raged, Hotaru killed Li Mei. The pyramid rose from the ground where Blaze stood ready to take on any challenger. In his non-canon ending Hotaru was able to kill Blaze, with this power Hotaru became the God of Order and was able to remake all the realms into his own image. As a final act of revenge Hotaru transformed his most hated enemy, Havik, into his most devoted follower by stripping him of free will. In canon he is killed at some point during the battle to which Shao Kahn claims the power.

In Mortal Kombat 11, Hotaru appears as a cameo character in Joker's ending, being killed by Mileena. 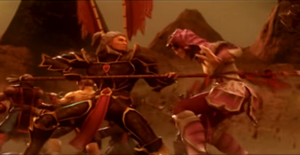