High priests to the Egyptian pantheon

Feasting with the Pharaoh.

Hotep and Huy are the secondary antagonists in DreamWorks' second full-length animated feature film The Prince of Egypt, which is based on the biblical epic story of Moses and the Book of Exodus. They are two trusted advisers (and technically high priests) to Pharaoh Seti I and later his son Rameses and are worshipers of the ancient Egyptian gods. They are also very contemptuous of Ramses' adoptive brother Moses and his claims, using their own "magic" (in reality, sorcery) to discredit his miracles and trying to show Egypt's superiority over Moses and the enslaved Hebrews. The dastardly duo even had their own musical number, "Playing With The Big Boys". In this scene, they are shown harassing Moses and trying to expose his miracles as frauds, calling on the name of several prominent Egyptian gods (most likely for theatrical effects as they appeared to be ancient stage-magicians rather than true wizards). Unfortunately for them, after Moses called upon the Ten Plagues of God, where all of Egypt suffered from disastrous plagues, Hotep and Huy’s cons were exposed when their ‘powers’ could not match God’s and Rameses threw them out of the palace, most likely banishing them from Egypt.

Hotep was voiced by Steve Martin (who later played Smek in Home, Orin Scrivello in Little Shop of Horrors, and Mr. Chairman in Looney Tunes: Back in Action), while Huy was voiced by Martin Short (who also played Jack Frost in Disney's The Santa Clause 3: The Escape Clause, Ooblar in Jimmy Neutron: Boy Genius, Preminger in Barbie as The Princess and the Pauper, Sebastian Ballentine in Law & Order: Special Victims Unit, and both Jester and The Appraiser in Legends Of Oz: Dorothy's Return.).

As well as their obvious antagonism towards Moses, they were shown to already be corrupt when they kidnapped a Midian girl named Tzipporah to either become the Prince Regent Rameses' wife, personal servant, or (most likely) concubine. However, Rameses rejected her after witnessing her fiery temper and offered her to Moses instead. Moses would eventually help the girl escape and later in the story would come to love and marry (it is worth noting that in Hotep and Huy's defense slavery was an acceptable practice in ancient Egypt so although it is abhorrent by our standards they likely saw no wrong in their actions).

Hotep and Huy are also symbolic figures who represent the ancient gods of Egypt and their struggle against Moses and the Abrahamic God (widely viewed as the one "true" god). This is especially prominent during the song "Playing With The Big Boys Now" in which they transform their staffs into snakes [or possibly switched them when no one was looking] and state to Moses "by the might of Horus, you will kneel before us!", unaware that Moses' snake had led their snakes into a hidden area and devoured them whole (symbolizing God's triumph over the rival pantheon).

Hotep and Huy also showed antagonism when they tried to convince the now Pharaoh Rameses to enforce a death penalty of Moses after he returned to Egypt years after accidentally killing a guard for cruelly treating a slave, however Rameses dismissed their suggestion (knowing fully that the killing was unintentional) and they didn't question him (likely due to the fact questioning the Pharaoh was a very dangerous thing to do in ancient Egypt, especially in a public place).

Ironically, they seem to have a certain way with kids (whom they approve of). This is shown when they are seen entertaining Rameses' young son, although this is most likely so they could achieve Rameses' favor.

During the first plague, when Moses turns the water of the Nile into blood with his staff, Hotep and Huy did the same thing by secretly adding red dye to a bowl of water, to which Rameses finds it very amusing. However, as the other plagues continued on, Hotep and Huy were of no help, as they too were affected by the plagues and were unable to pretend they could level God's power. Outraged by their lack of regard over the plagues bringing Egypt to ruins and possibly for tricking him, Rameses angrily thrashes their potion's table and orders them to leave the palace immediately, to which they reluctantly do so.

It is unknown what has happened to Hotep and Huy afterwards, but it is most likely that they were banished to somewhere unknown by Rameses for failing to match the power of God. That or one of the plagues may have killed them.

Hotep is infuriated after Moses and Ramses destroy a marketplace and part of a temple whilst they are chariot racing.

After Moses accidentally kills an Egyptian guard, Hotep declares that Moses must be punished before Moses flees Egypt in guilt.

Some years later after Moses returns to Egypt to ask a now Pharaoh Ramses to free the Hebrews and Ramses agrees as long as Moses will be his advisor, Hotep arrives with a royal decree that doubles the Hebrews' workload. Hotep along with Ramses' wife Nefertari, influences Ramses to break his promise to Moses.

Hotep accompanies Ramses and his army as pursue Moses and the Hebrews as they leave Egypt.

When Moses offers himself as a ransom to Ramses for the Hebrews freedom, Hotep urges Ramses to kill Moses. However, Ramses refuses as there has been too much death and instead reconciles with Moses.

Not agreeing with Ramses, Hotep takes control of the army and pursues Moses and the Hebrews through the parted Red Sea. However after the Hebrews have crossed to the other to safety, the Red Sea falls back down, drowning Hotep and the army to drown.

Hotep and Huy are cunning, ruthless, diabolical, manipulative and blasphemous magicians. They are deceitful, traitorous and pretentious, so they always use magic to ensure subordination to their Pharaoh. They are also a source of amusement for young Moses because they are so easily irritated by his "blasphemy". They serve as comic relief to balance the many serious themes of the film. However, in the end, the two are truly nothing more than arrogant and manipulative con men that weasel their way into power, but ultimately fail to truthfully deliver in the end. 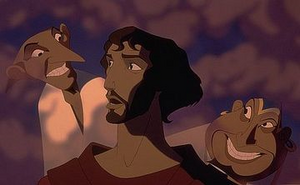 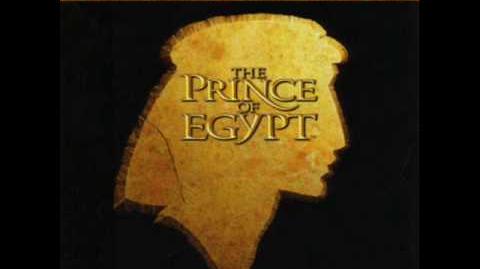 The Prince of Egypt - 07 - Playing With The Big Boys