Queen of the Earth Kingdom

Capture the new airbenders and force them into her elite army.

Capture Team Avatar for "crimes" against the Earth Kingdom (both failed).

She was voiced by Jayne Taini.

Hou-Ting was born sometime after the 100 Year War had ended. As she got older, she eventually became the ruler of Ba Sing Se, making her the 53rd Earth Monarch. As she grew up Hou-Ting has shown to be extremely critical, obnoxious, defamatory, opprobrious, and vituperative when her father gave Avatar Aang part of the Earth Kingdom to create Republic City. During her rule, Hou-Ting proved to be an abusive tyrant who exploited her citizens and as she did so, she left the Earth Kingdom in major disarray. Multiple cities such as Zaofu opposed the Earth Queen's oppresive rule. Some citizens such as Mako and Bolin's grandmother Yin continued to worship the Queen as a grand ruler of the nation.

Sometime after the Harmonic Convergence, Hou-Ting discovered that Airbenders have been appearing in Ba Sing Se. So she commanded the Dai Li to capture all of them so they can become members of her personal army.

Eventually, Korra and the members of Team Avatar heard rumors that a lot of the new Airbenders have been showing up in Ba Sing Se. Korra thought that the Earth Queen could assist them with their search. Before she accepted, Hou-Ting asked Korra for one favor. She asked Korra to prevent a group of bandits from stealing the taxes. After Korra and Asami managed to fend off the bandits, their leader; Gombo told them that they have sided with the wrong person.

For some unknown reason, Korra felt that Gombo was right. After Korra successfully protected the taxes and brought them to the Earth Queen, Korra asked for Hou-Ting's assistance with the search of the Airbenders. However, Hou-Ting quickly stated that the rumors about new Airbenders were false. Korra didn't believe Hou-Ting's statement and criticized her for extorting her own subjects. Enraged, Hou-Ting commanded Korra to leave the palace. Korra did so and continued her search without the Earth Queen's assistance.

The next day, Hou-Ting falsified a report of an airbender outside Ba Sing Se, hoping the Avatar would leave the city for it. However, knowing Hou-Ting was lying about knowing nothing about airbenders, Korra and Asami bought them time to learn the location of the captured airbenders, which was under the Earth Queen's Temple. Later that night, as Korra, Tenzin, and Bumi attempt to leave with the now liberated airbenders, Hou-Ting arrives with the Dai Li, demanding the airbenders be returned to her because they are Earth Kingdom citizens, and thus belong to her. She also stated that leaving them would be an act of war against the Earth Kingdom. Korra refused, and Hou-Ting ordered the Dai Li to attack. However, they were unsuccessful, as not only did Team Avatar escape, but Hou-Ting became unable to lead due to her allergic reactions to Oogi's fur.

Hou-Ting was not done trying to create an army of Airbenders, so she hired a few Bison Rustlers to not only capture as many Airbenders near the air temples, but also capture the endangered Sky Bison, so she could enjoy her exotic meals.

After capturing Mako and Bolin, Zaheer brings them to the queen, and she orders them imprisoned in her dungeon. She refuses when Zaheer demands that she surrendered Korra to him, until he tells her that it would cause an international conflict. She receives the news that the airship in which Korra was being held prisoner was brought down in the desert, and after demanding that Zaheer tell her where the airbenders are, she orders his gang imprisoned. They resist and easily take out the guards, and Zaheer assassinates the Earth Queen before she can react by using his airbending to drain the oxygen from her lungs, a new form of airbending that he had invented called "breathbending."

Hou-Ting's death caused the entirety of the Earth Kingdom to fall into chaos and anarchy, with bandit gangs rioting towns and cities all over the kingdom and most states suffering from poverty and starvation due to the power vaccum rendering the nation unable to stop the uncontrollable sieges and pillagings. 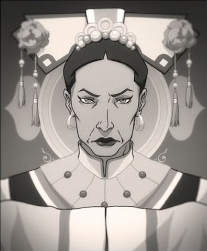 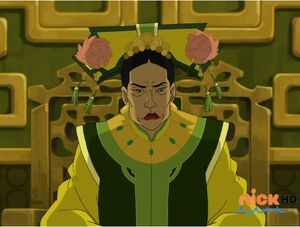