Obey the orders and will of Aleister Crowley.

Fanatics, Terrorists
Hound Dog (猟犬部隊ハウンドドッグ Ryōken Butai (Haundo Doggu), lit. "Hound Force") is a military black ops unit and is a major antagonistic faction appearing as the primary antagonistic faction of both the A Certain Magical Index II anime series and being the primary antagonist faction of the Academy City Invasion Arc. It is lead by Amata Kihara and is founded for the soul purpose of serving Aleister Crowley and to obey and follow his orders and wills.

During the Daihasei Festival Arc, Hound Dog makes an appearance as secret military operatives await on top of a roof while Mikoto Misaka and Shokuhou Misaki are heading towards the building where the exterior is being held at. They burst into the building they were waiting on top of and they abduct Keitz Nokleben under the orders of Gensei Kihara. Misaki and Mikoto arrive too late but Kuroko and Mitori chase after the soldiers and manage to dig up some laments when they tried to bury their tracks. Based on the recovered evidence, the soldiers are heavily implied to have been Hound Dog operatives.

During the Academy City Invasion Arc, Hound Dog is seen being mobilized after Crowley gives them an order. A Hound Dog unit is mobilized to kidnap Last Order in order to use her for Crowley's plan during the Invasion of Academy City by the hands of Vento of the Front of God's Right Seat. Accelerator manages to escape and he breaks into a nuclear facility where he is surrounded by Hound Dog units. They split into separate squads with the intent of killing Accelerator, Touma, Index and any known witness they see and retrieve Last Order.

While they're chasing after Accelerator, they break into the facility only to have all of the members get slaughtered and brutally gunned down by him and eventually a nearby hospital. Touma tries to shake them off while protecting Last Order but he gets surrounded and cornered by Hound Dog soldiers until they are killed upon Vento's arrival. Touma then tried to get Mikoto to help him while he went face-to-face with Vento and engaged her in combat. Another group of Hound Dog soldiers are with their commander but they are killed by Accelerator during the fight between him and Amata.

In the aftermath of the 0930 Incident, the surviving members from the conflict regroup and are placed under the command of Measure Heart, a former operative of the SCHOOL organization. Under the orders of Aleister Crowley, the Hound Dog unit is to track down and eliminate Shiage Hamazura for survivng the Battle Royal and for actually defeating Mugino Shizuri. Shaige gets attacked by the Hound Dog Operatives and is about to me killed when Mugino shows up and saves Shaige claiming that only she has the right to kill him and Shaige escapes.

Kihara Amata acts as the organization's leader and head commander while Aleister Crowley is the one who the organization has sworn allegiance to and answers only to him and Amata. Other leaders are most likely commanding officers and squad leaders usually of lower-rank.

Members of Hound Dog operate in secrecy. They are not to be known outside of the organization and keep their identities and their operations in secret. Hound Dog as a whole can not be revealed by the outside world leaving the organization to kill any witness they find. Operatives wear black military gear and helmets with face masks and army helmets to conceal their identity and hide their faces. Their real names are hidden and are usually called by various different western names chosen by Amata who they fear along with Crowley. Members of Hound Dog have no known attachment to each other and operate under one single objective but will betray one another when dealing with multiple tasks if necessary.

Hound Dog has a vast set of various different resources and gives them their strength when operating on the field. Hound Dog members are very talented and skilled with firearms and they often use submachine guns possibly the Tavor TAR 21 Assault Rifle based off of its shape. Hound Dog operatives also use various different firearms and have strong body armor and military gear for their soldiers and the operatives are far more dangerous and lethal then Anti-Skill (Academy City's police and security forces). They also use anti-tank rocket launchers and powerful shotguns alongside their primary weapons.

Hound Dog operatives also have their hands on advanced technology. One of their sensors is called the Olfactory Sensor and it's able to detect and individual based on their scent even in the rain (hence their name). It's based on various different perfumes which were converted into military purposes and serve as a useful tool when hunting down prime targets on various different missions. They also have different medical tools and gadgets when i operating and have a special spray which covers up their tracks including fingerprints and blood and other DNA Information. 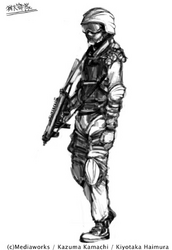