Draining the lives of innocent people.

Kill 47272 people in his city to become immortal (failed).

The Hourglass (real name: Lou Landers) is a life-draining supervillain and the main antagonist in the 2008 spoof film Superhero Movie.

He was portrayed by Christopher McDonald (who also played Shooter McGavin in Happy Gilmore and voiced Kent Mansley in The Iron Giant).

Lou Landers was a brilliant scientist and a wealthy businessman who is the head of his company Amalgamated Pharmaceuticals and uncle of the arrogant teenager Lance Landers at Empire City High School. But he suffers from a terminal illness. He later gained the ability to drain the life energy from others and restore his own, killing them in the process. And it all started in a lab accident the night at the Amalgamated corporate headquarters in Empire City when his newly developed rejuvenation machine that was designed to the total cure to sickness, exploded but somehow succeeded, and Landers ended up draining the life energy of others, starting with Mr. Carlson and his former board of directors (who despised him and wanted him out of the way), declaring their deaths a "personnel change" for his corporation.

He plans to drain the life force of about 47272 people in his city in order to become fully revived to perfect health permanently, becoming immortal.

His plan to do that at both the World Humanity Awards and Herocon within the Empire City Convention Center with nearly 48, 000 people in one place was foiled by his nemesis, the Dragonfly. Hourglass threw a timed-bomb at the Dragonfly. Unable to remove the bomb, The Dragonfly approached the Hourglass and Hourglass was killed by the explosion. The Dragonfly remained safe because of his armoured skin ability which gives him great invulnerability. 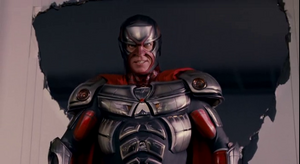 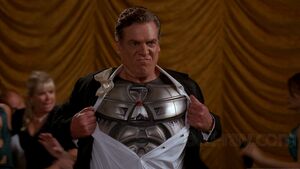