Seize control of the Doctor's TARDIS (succeeded).
Kill the Doctor and his companions (failed).

House is the main antagonist in the Doctor Who episode "The Doctor's Wife". A malevolent cosmic entity feeding on TARDISes for their artron energy, House ultimately seeks out the Doctor's TARDIS in pursuit of further meals, even though his objectives quickly change once he realizes what has become of the Time Lords.

House was voiced by Michael Sheen who also portrayed Aro in Twilight.

It is unknown how long House had existed prior to the events of the episode; however, what is known is that he eventually discovered the existence of the Time Lords, whose TARDISes were filled with the artron energy he needed to feed upon. Using Gallifreyan distress signals to lure Time Lords to his surface, House would siphon the essence of their TARDISes and devour it, usually murdering the Time Lord pilots for good measure. Along the way, he also acquired his playthings, Uncle, Auntie, the Ood Nephew and Idris from the castaways marooned on his surface, crudely "repairing" their dying bodies by supplying them with organ grafts from dead Time Lords. By the start of the episode, the four of them are little more than extensions of his will.

After the near annihilation of the Time Lords in the Last Great Time War, House grows hungry once again: sending out a hypercube distress signal from a Time Lord named the Corsair (one of House's past victims), he manages to get the attention of the Eleventh Doctor. Accompanied by Amy Pond and Rory Williams, the Doctor arrives on House's surface, eagerly hoping for an opportunity to meet another Time Lord. Soon after, House uses his powers to remove the matrix from the Doctor's TARDIS and plants in the body of Idris, where it can be safely consumed.

However, during a conversation with the Doctor, House learns the Time Lords are now extinct. Realizing his food source has been eliminated with them, House decides on a change of plans. Instead of simply feasting on Idris and leaving the vacant TARDIS to rot, he possesses it, using it to reach the main universe in pursuit of new sources of energy and entertainment. While the Doctor and Idris are distracted by the cache of hypercubes and the revelation of just how many Time Lords have been murdered on the asteroid, House makes good on his escape and vanishes with the TARDIS, taking Amy, Rory and Nephew with him.

Without House to sustain them, Auntie and Uncle soon expire, and the bubble reality in which his now vacant body resides is soon to follow. Hastily cobbling together a makeshift TARDIS from the wreckage strewn about the asteroid, the Doctor and Idris quickly pursue House as he flees back into the universe.

Meanwhile, House revels in his new body and the new powers it offers him. Demanding entertainment from his captives, he sends Amy and Rory on a frantic chase through the TARDIS corridors, separating them via the doors, inverting the gravity in the hallways, and even directly altering their perceptions of reality. In one such hallucination, Amy witnesses Rory trapped and tortured for centuries in one of the corridors, eventually left as a desiccated husk surrounded by graffiti reading "HATE AMY", "DIE AMY", "KILL ME AMY". In another scenario, House mentally blinds Amy, leaving her to almost blunder into Nephew, now deployed as a direct threat against them.

Fortunately, the Doctor's jerry-rigged TARDIS is eventually able to catch up with House. Telepathically communicating with Rory, Idris directs him and Amy into one of the old console rooms and has him lower the shields, allowing the pursuing TARDIS inside. A moment later, the Doctor and Idris materialize aboard, accidentally killing Nephew in the process. Though House still has the passengers at his mercy, their journey back to the universe still requires fuel best gained from deleting surplus rooms, and the Doctor is able to trick House into deleting the old console room with them inside it, a failsafe automatically teleports the four of them back to the main console room, much to House's strong annoyance.

However, it is at this point that Idris, unable to contain the TARDIS' energies any longer, finally dies. As her body is back in the main console room at the time, the freed matrix is able to repossess the time ship, expunging House's essence from the TARDIS once and for all, presumably killing him in the process.

Residing in a pocket dimension sitting just outside reality, House's body is an asteroid-sized celestial body. His exact age is unknown, though comments made during the episode suggest that he is at least half a million years old.

The Doctor describes House as "a sort of sea urchin", with a tough outer shell protecting a soft interior. Though the idea is raised further when House is introduced to the Doctor through a mesh-covered hole in the ground, most likely a pore in the surface of the creature to the body at its very center. This internal body is never actually seen. As a sentient asteroid, House lacks any recognizable features normally encountered in sapient life-forms. His shell is immediately distinctive, being littered with mechanical refuse collected over the centuries of his existence, including the empty shells of past TARDISes.

Though he initially appears to be immobile, House reveals himself to be capable of abandoning his body in favor of a swirling cloud of green vapor, essentially a manifestation of his consciousness. Already capable of telepathically possessing Auntie and Uncle to speak for him, he can use his intangible shape to permanently possess the Doctor's TARDIS, and later the Ood Nephew. Subjects under this possession often exhibit a sickly green glow, most notably in the case of Nephew, whose eyes glow ominously while under House's influence.

House is a ravenous, cunning, merciless and cruel being who lives solely to indulge his monstrous appetites, regardless of how many innocent people have to suffer and die in the process. He is able to put on a superficially benevolent performance for the Doctor when he first arrives on the asteroid, but very quickly casts this aside once it becomes clear that he will have to look elsewhere for food and entertainment. At all other times, he treats his captive audience with a mixture of mocking politeness and amused contempt, advising them to be careful around fatal drops, even jokingly asking if they are having fun.

Rory quickly surmises that House is a sadist, observing that he will not kill them as long as they are of some entertainment value: as such, his repeated query of "Why shouldn't I just kill you now?" is more than just a dangerous question, but a warning not to bore him. House is happy to use any kind of torture over the course of his games: though he seems to be comfortable with using violence or the threat of violence against his captives, he derives particular pleasure from emotional torture. In one case, he carefully sets up a scenario in which Amy has to watch Rory being trapped, then being tortured over the course of decades until he succumbs to insanity, before finally dying, surrounded by scrawled messages detailing how much he hates Amy. In each case, House enjoys watching Amy's grief and horror at Rory's degeneration and death, Her disorientation when she finds the real Rory still alive and well.

In the end, House's sociopathic nature is his undoing. His arrogance drives him to dismiss the Doctor's impressive ingenuity, while his eagerness to kill and torture allows the Doctor to fool him into deleting the old console chamber, leaving him at the mercy of the TARDIS matrix that he had so thoughtlessly abandoned. 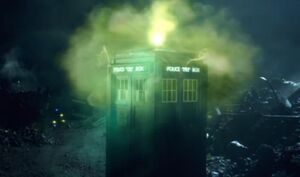