To kill or eat the audience

Undead Fighter
Howard "Hellion" Fightington or Howard Fightington is one of the Zombies from the Regular Show episode "Grave Sights."

He was voiced by Mark Hamill, who also voiced Skips.

After Rigby accidentally revives all the dead people in the graveyard as zombies he and Mordecai along with the other park employees try to fend them off from attacking the audience of people for their movie night using Muscle Man's sports equipment. While fighting them Howard Fightington is revived as one too. When he emerges he looks similar to the big zombie in the movie. Due to large size and fighting skills he becomes to strong for the park employees to beat. He even proves to be too strong for Skips to beat, even when he kicks Howard in the groin, which causes it to disintegrate. It wasn't until Mordecai and Rigby finally killed him by driving a golf cart right into him, which is similar to how the guy in the movie defeated the big zombie.

He reappears in "Exit 9B" with the other zombies as one of the many villains revived by Garrett Bobby Ferguson Jr. but gets sent back into the portal after Thomas signs the document. 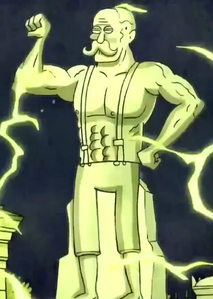 Howard's Grave
Add a photo to this gallery

Retrieved from "https://villains.fandom.com/wiki/Howard_Fightington?oldid=3774076"
Community content is available under CC-BY-SA unless otherwise noted.