Maintain order inside his bunker while trying to stay alive at all costs (failed).

Have a father-daughter relationship with Michelle and prevent her from escaping his bunker or kill her (failed).

Howard Stambler is the main antagonist of the 2016 psychological science-fiction thriller film 10 Cloverfield Lane. He is a survivalist, former sailor, conspiracy theorist, and the kidnapper of Michelle.

Howard Stambler was born into a family that had more than one eccentric and conspiracy theorist in it, including his brother, Mark. Howard served in the United States Navy, which allowed him to acquire a number of skills that would prove beneficial in a life-or-death situation. For years, he lived at 10 Cloverfield Lane in rural Louisiana with his family, where he was known for his numerous conspiracy theories, before they left him and moved to Houston. Though he corresponded through letters with his daughter, Megan, he despaired and felt desperation for restoring his father-daughter dynamic.

Howard hired a local youth, Emmett DeWitt, to help construct a bunker. After it was completed, he abducted a young girl, Brittany, and had her assume the role of Megan in the bunker. She was displeased with her predicament, however, and looked to escape, prompting Howard to murder her.

One of Howard's conspiracy theories comes true, as an alien invasion force attacks, knocking out communications in the vicinity of the bunker. Emmett enters the bunker, resulting in a broken arm, though Howard reluctantly allows him to stay. As the invasion takes form, Howard comes across a woman in a car, Michelle, who is fleeing from her fiancé and runs her off the road. He takes her to the bunker and gives her rudimentary medical treatment for the injuries she sustained from the car crash. Michelle attempts to use the objects in her cell to escape, but Howard overpowers and sedates her.

Howard allows Michelle to roam the bunker and befriend Emmett, but keeps a strict and controlling vigil over her. During dinner, he takes issue with nuances Emmett and Michelle make and even threatens Michelle when she flirts with Emmett. Michelle smashes a bottle into Howard's forehead and uses his keys to attempt to escape. However, she sees a delirious woman with infected skin, confirming Howard and Emmett's claims about the attack. Howard confesses to Michelle that it was indeed he who ran her off the road. He shows Michelle a picture of Brittany, claiming that it was Megan, and agrees to be more amicable with his housemates.

Unknown to Howard, Michelle and Emmett uncover proof that Howard is desperate for surrogates for his daughter, Megan, and that he murdered Brittany. He becomes aware when he finds that his tools are missing, which were used to assemble a biosuit for escape. After finding the tools, he threatens them with a vat of perchloric acid and demands to know what they were using them for. In defense of Michelle, Emmett accepts the blame and claims he was creating a weapon to steal Howard's gun, wanting Michelle to respect him instead of Howard. Emmett apologizes to Howard. After telling Emmett that he accepts his apology, Howard summarily executes him with a revolver.

With Emmett gone, Howard finally has the father-daughter dynamic with Michelle. Michelle continues to work on the biosuit but Howard sees it sticking out of the bed. He forces Michelle off the mattress and finds the biosuit. Michelle then makes her escape attempt, with Howard giving chase and cornering her.

Michelle then dumps the acid on Howard, which severely burns him and causes a fire. Howard recovers and confronts Michelle as she flees. Michelle drops a cabinet on him and escapes to the air vents. But Howard recovers again and makes one last attempt to stop her by stabbing at her through the air vent and grabbing her foot, trying to explain that "You can't run from them". Michelle manages to evade him and escape, the underground bunker soon explodes from the fire, killing Howard in the process and finally freeing Michelle from her captor.

Howard was a short-tempered, cynical and violent conspiracy theorist. He intended on keeping Michelle as prisoner for the rest of his life because he wanted at least one female to keep him company during their stay in the bunker. Howard wanted Michelle (but not Emmett) to stay with him in the bunker. Despite Emmett meaning no such disrespect to Howard, Howard still showed anger at Emmett's attitude, for Emmett trying to keep an optimistic and positive attitude about their stay in the bunker, which Howard was annoyed with and considered it as mocking their dismal situation. 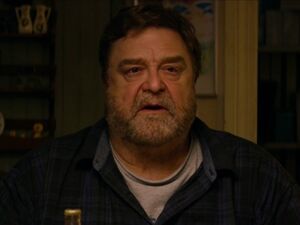 Howard's villainous breakdown after being splashed across the face with the perchloric acid by Michelle. 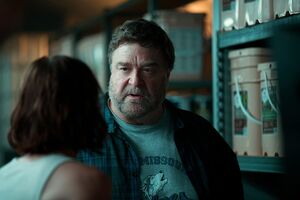 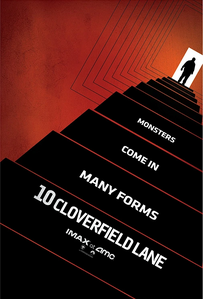