Huge-Gigantacus is the central antagonist of the mobile game Plants vs. Zombies Heroes. He is a mutated Imp who wanted to take over the universe that leads Sneaky and Brainy classes.

Huge-Gigantacus was originally an Imp who was being launched on the Meteor Z alongside a Basic Zombie, a Conehead Zombie, and a Gargantuar. After landing on the meteor, the Conehead Zombie and the Gargantuar were transformed into an Interdimensional Zombie and a Gas Giant respectively. The Imp was transformed into Huge-Gigantacus, and his ultimate plan was attempting to take over the universe with the Meteor Z, which forces Beta-Carrotina and her team to stop him.

Huge-Gigantacus successfully crashed the Meteor Z on Earth's core, which he later discovered a group of colossal plants and zombies.

Huge-Gigantacus invented his only creation, the Terror-Former 10,000. One cannot judge its appearance, as it can create environments for its galactic conquest.

Iron Boarder is Huge-Gigantacus's minion, which is a Sports Imp Superpower Zombie card of Brainy class. He costs 1, his strength and health are two and three respectively, and his trait is Bullseye. While being in an environment, he gains one extra strength and health. When attack, he shoots an electric beam at plants.

Teleportation Station is a Science Superpower Environment of Brainy class. It is a station that costs 1. Start of turn, when there's a zombie in this environment, the players gain a Teleport.

Ice Moon is a Superpower Environment of Sneaky class. It is an ice environment that costs 1. Zombies in this lane gain Strikethrough, and when this environment is played, it freezes all plants in the same lane. 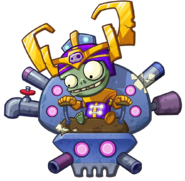 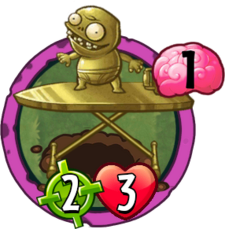 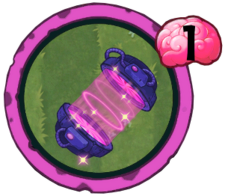 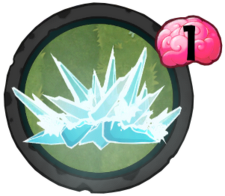 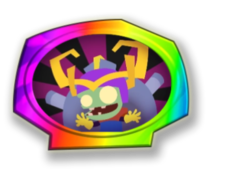 Terror-Former 10,000
Add a photo to this gallery

Retrieved from "https://villains.fandom.com/wiki/Huge-Gigantacus?oldid=4180521"
Community content is available under CC-BY-SA unless otherwise noted.