Experiment-1170, most commonly known as Huggy Wuggy, is a major antagonist in the 2021 horror video game Poppy Playtime, serving as the main antagonist of Chapter 1: A Tight Squeeze, and a mentioned/possibly posthumous antagonist in Chapter 2: Fly In A Web.

He is a toy created by Playtime CO., as well as their mascot and highest-selling toy. Although he appears as a huggable, friendly mascot, Huggy Wuggy is a dangerous, predatory monster as a result of being experimented on by the scientists at Playtime Co. and desiring to consume the flesh of other humans.

Huggy Wuggy was created by Playtime CO. to be embraced by children. The toy soon became the most successful product of the company, but he was eventually modified at some point before the events of the game with a transferred but corrupted human conscience, which turned him into a monster.

His first appearance saw him pretend to be a statue to fool the protagonist. As soon as the protagonist managed to grab the key and turn the power back on in a room (that requires said key), Huggy Wuggy disappears from his pedestal, and throughout the game, he stalks the player from vents or high unreachable places. It is not until the player runs into the dark that it will appear from the shadows and chase them down in the conveyor belt tunnels. Every time the player fails to reach the catwalk at the end of the belt, they are met with Huggy Wuggy snatching up and killing them with its teeth.

If the player does manage to get to the catwalk, they must pull a box to block the creature and destroy it, causing them both to fall. Where the player survives, Huggy Wuggy ends up falling into the void while colliding with some pipes. It is unknown if it survived or has died due to this.

Huggy Wuggy is shown in the game to be an enormous monkey-like creature with incredibly long arms and legs, leaving him standing at a towering height of at least 10 feet. He has blue fur and many razor-sharp teeth, on top of having another mouth inside of his mouth. He has yellow hands, red lips, and eyes that resemble googly eyes. While seemingly a robotic creature, Huggy Wuggy's revelation of his multiple mouths, the blood he produces when he falls to his supposed death, and the saliva in his mouth when he kills and consumes the ex-employee heavily hint at him being organic.

Huggy Wuggy is a barbaric and bloodthirsty creature. As one of his first roles in the game was chasing the protagonist down a hatch. However, in spite of his seemingly mindlessly violent nature, he still has the capability of manipulating and formulating strategies to attack his opponents, as shown when he actively lured the protagonist deeper into the facility all the way in while stalking them but also slowing his pursuit when he realized that he had them cornered. He is stated to be average in intelligence, and is very loyal to his superiors. 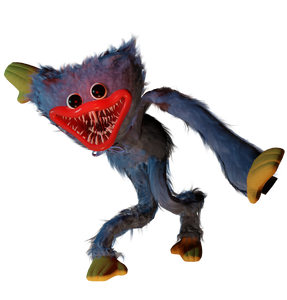 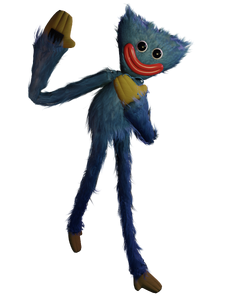 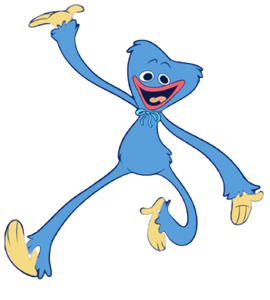 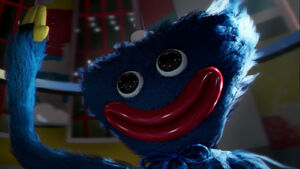 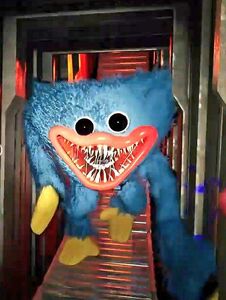 Huggy Wuggy chasing the player through the vents. 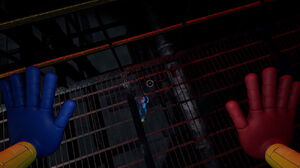 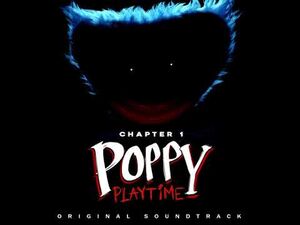