Landlord and owner of Hell House

Claim the Hell House for himself perpetually.

Hugh Kane is the main antagonist of Scary Movie 2, the second installment of the Scary Movie film series.

He is a parody of Hugh Crain of The Haunting and Reverend Henry Kane of the Poltergeist film series as well as Pazuzu in the start of the film. He is the ghost of Hell House, the haunted house in the film.

He was portrayed by Richard Moll, who also played Death in the Dante's Inferno videogame and Big Ben in House.

Hugh Kane was the most recent owner of the Hell House which had been made in the 1700s. Owner after wealthy landowner had lived in the House but all had fallen on ill times. Kane was the latest; being alive in the 1970s (as explained by Professor Oldman in a deleted scene) and according to the same deleted scene, Kane held the whole town in his power; and lived in Hell House, he was a very rich land owner and seemed to want children to inherit his possessions but despite raping all his mistresses he never had any. He became more of a monster each day and finally he was caught having sex with his mistress (despite not having children) and his wife walked in on them and saw them cheating, so she killed them in a rage.

Hugh Kane's ghost had possessed a young girl named Megan Voorhees (who is a parody of Regan McNeil from The Exorcist) who was in the house, and he insulted everyone he met. Her mother could not take it and hired two exorcists but the exorcism went awry and Hugh vomited everywhere, causing a vomiting chain. Afterwards, the priests could not do the rituals because of Hugh's insults, so finally he insulted Father McPheely's dead mother; the priest replied by shooting the girl dead.

Later, when Professor Oldman hired the house as an experiment for insomnia, actually intending to prove ghosts were real, Hugh immediately attacked the teenagers as soon as they spent the night there. Hugh possessed his immortal cat, Mr. Tiddles, making him fight Cindy, but she fought back, although Hugh eventually won by throwing kitty litter in her face, scratching her, and knocking her out. Later, Hugh possessed a clown in Ray's room and almost strangled him to death but Ray turned the tables and raped the clown doll. Hugh snuck up on Alex, who was smoking, and forcibly raped her; however, she actually enjoyed it. Hugh sat around smoking with her, but when she expressed desire to wed him, he got cold feet and fled. Hugh then possessed a marijuana plant Shorty had, making it grow gigantic and try to smoke him, but Hugh was distracted by some Doritos and Coke, dropped Shorty, and left.

Later, Dwight, the assistant, realized Hugh was becoming more aggressive and wanted to leave the house immediately, but Oldman, determined to both discover Hugh and possibly get laid by any of Cindy, Brenda, Theo, or Alex, refused and gave Dwight the keys to the gate, which would keep all of the teenagers from getting out until he gave the word. Buddy overheard all of this, however, and found out the house was haunted, taking this news to the teens. Upon learning all of this, the teens went into a panic and wanted to escape right away. Theo had an idea to seduce Dwight so she could steal his keys, which was successful. Then, Hugh locked them all inside once the ghost of his mistress killed Oldman. He possessed his skeleton and tried to chase Cindy and Brenda, but Brenda rearranged the skeleton, pointing out that skeletons are not scary. Hugh had to walk off humiliated, but he came back, hoisting Buddy up by his pants (giving him a wedgie), and then threw Buddy and Cindy into the freezer room, hoping to freeze them to death, but Cindy broke them out.

Alex was also pursuing Kane, but she wanted to be with him forever. Even Kane was disturbed by this, and he put Alex out of the picture by forcibly rejecting her; attempting to kill her with giant boulders, and finally disposing of her by dropping a chandelier on her.

Hugh then pursued Dwight to the top floor, where they both had a wild wheelchair race, with Hugh riding his own ghost wheelchair. After trading cowboy insults, they prompted some doves to fly overhead (with one of them defecating on Dwight). Hugh glided and shot right through Dwight, vanishing, and leaving Dwight to shoot out the window and fall right into the ground when Hanson the caretaker would not hold on. Hanson was then possessed by Kane.

Hanson was pursued by Cindy, Brenda, and Theo to the cellar, where he fought them all, but Cindy was his match, as she summoned a tornado to destroy Kane but was unsuccessful, and Kane left Hanson. The final showdown was in the house's main hall, where Cindy summoned Kane out, but he fell downstairs. They got the machine ready to destroy Kane, and Dwight pressed the button, which caused energy to combust Kane. Cindy would have been killed, as well, but both Dwight and Ray pulled her away from the platform safely. 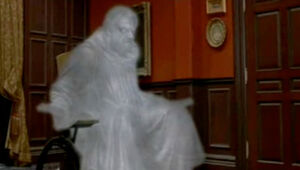 Retrieved from "https://villains.fandom.com/wiki/Hugh_Kane?oldid=4200961"
Community content is available under CC-BY-SA unless otherwise noted.