Bully at Klaro's school (as Hugo)

Headmaster of the ghost school (as Fatzko)

Manipulative Bully
Hugo is an antagonist of the Austrian book series "Tom Turbo", serving as the main antagonist in the book "Die Gespensterschule".

Hugo is a bully who goes to the same school as Karo and Klaro, the kids who built Tom in the books. One day, he bullies Klaro again and tells him to prove his bravety by going to a specific house in the forest on his own. Klaro enters the house together with his sister Karo and Tom Turbo. The kids enter a room which seems to be a classroom. Suddenly, creatures appear all around the room, seemingly a class of ghosts, who greet him as their new member. The ghosts seem to admire someone call Fatzko. When Klaro wonders who that is, the teacher explains that he is the headmaster of the ghost school, and a monster appears in a wall, introducing itself as Fatzko. Fatzko orders Klaro to take any chance he has to steal during school and deliver the money to him every Friday, otherwise he would haunt him every night.

When leaving the house, the kids and Tom notice someone racing away on a motorbike. They follow the strange person to a fun park, where they recognize a woman working on the ticket sales of the ghost train as the mysterious person. Deciding to follow her after she left, they enter the ghost train, with Klaro realizing that the monster on the ghost train's entrance is Fatzko. Once inside, Karo and Klaro get kidnapped by the woman, who dressed up as a spider. After freeing themselves, the kids are told by the woman that someone had stolen her attractions, including the monster from the entrance. She followed the thief into the forest and believed the kids to be responsible after they came out of the house and said something about ghosts. Tom decides to wait for Fatzko at night and surprise him.

At night, Fatzko appears in Klaro's room and tries to scare him, only to be scared himself when an even scarier monster appears, who is actually Tom in disguise. fatzko is revealed to be Hugo, who stole all the monsters from the ghost train to scare Klaro. He wanted Klaro to be the bad guy in everyone's eyes because he himself had no friends. Tom decides to help Hugo by cleaning him up and giving him a proper haircut to give him a better look. Hugo then stops bullying his classmates and even finds friends at school. He also helps the owner of the ghost train and builds new monsters for her. 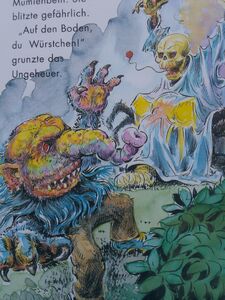 "Fatzko" gets scared by Tom in disguise 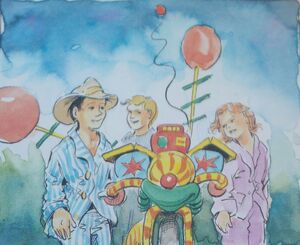