Handling and trafficking of drugs

Using drugs to kill his hostages.

Sell as many drugs and kidnap as many people as ransom to sell for money (all succeeded).
Kidnap and torment Gabrielle until she dies (indirectly succeeded).
Defeat and kill John Rambo and Carmen Delgado so as to prevent getting himself and his associates from getting killed and prevent his crimes from being exposed then continue his drug trafficking while killing and kidnapping anyone else who stands in his way (all failed).

Hugo Martinez is the final antagonist of the Rambo franchise, serving as the main antagonist of the 2019 film Rambo: Last Blood. He is the leader of a drug cartel (along with his brother, Victor) who is responsible for kidnapping Gabrielle and causing her death.

He was portrayed by Sergio Peris-Mencheta.

Hugo and Victor Martinez together kidnap and hold Gabrielle hostage in a club while in Mexico. Rambo travels to Mexico and interrogates both Miguel and Jezel about Gabrielle's whereabouts. Jezel reluctantly leads Rambo to the club where Gabrielle was last seen and confronts El Flaco, the man who last spoke with Gabrielle.

El Flaco leads Rambo to the location of the kidnappers while being followed by a mysterious woman, not before being immediately confronted and beaten by the cartel. They steal his driving license, getting to know the locations of Rambo's farmhouse and a photo of Gabrielle, whom Victor recognizes. Unaware of Rambo's brutality, the cartel vow to abuse Gabrielle further due to Rambo's actions to break him.

The mysterious woman reveals her identity as Carmen Delgado, who is an independent journalist reporting the deeds of the Martinez siblings, who had kidnapped and murdered her sister. Rambo later raids the brothel, killing several men until he finds a drugged Gabrielle. On the way back home, Rambo thanks Gabrielle for giving him hope for ten years before she dies from the forced overdose.

Rambo sends Maria away and rigs the ranch with traps for a confrontation, later returning to Mexico to ask Carmen's help in finding Victor. Carmen refuses initially, believing it will solve nothing but is convinced after Rambo appeals to her grief and frustrations.

Rambo raids Victor's home, killing several guards and decapitating Victor while he is taking a shower. In retaliation, realizing he and his brother made a mistake in underestimating Rambo, Hugo leads a group of heavily armed hitmen to Rambo's ranch, where each falls victim to the rigged traps. Saving Hugo for last, Rambo pins him to a wall and rips his heart out with a knife, ending the Martinez siblings and their crime organization for good.

Hugo Martinez is one of the most despicable and abhorrent villains in the Rambo franchise. He is a violent and aggressive man who wants to kidnap thousands of young Latina women for his prostitution ring. He is always angry most likely due to his drug use affecting his behavior. Hugo intends to use the money he acquires from human trafficking to fund his drug addiction to cocaine and possibly other drugs. Hugo appears to be using (and started taking) drugs to take his mind off the severe poverty that's struck the Mexican economy hard, as indicated that Hugo while he lives in a large lavish mansion still has to live near poor, famished villages where the only source of entertainment is drugs, sex slaves and partying hard.

In addition, Hugo is shown to be racist towards white people, as noted when he calls Rambo a "gringo" and hypocritically dreads of a future where whites are invading his homeland of Mexico when he himself abducts young Spanish-speaking women from the United States into Mexico for his prostitution ring.

His ruthless and aggressive actions proved to be his downfall in the climax; this was shown when after his men were killed by each of the traps set up by Rambo, he attempted to escape from the barn, only for Rambo to fire arrows at him in order to prevent him escaping as well as cleaving Hugo open then ripping out his heart to finish him off as an act of revenge, symbolically proving he was, is and always had been; really a hypocritical, heartless bastard who does horrendous things in Mexico. 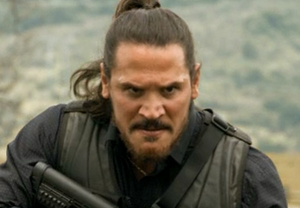 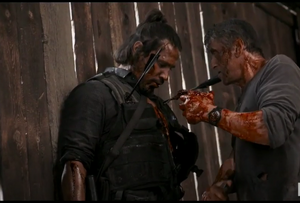 Hugo meets his end when Rambo rips his heart out.