Tales from the Borderlands

Getting rich.
Riding his car.

To become rich and powerful like Handsome Jack, kill Rhys and his friends. (all failed)

He is voiced by Patrick Warburton, who also played Cad Lackey in Underdog, Ken in The Bee Movie, Kronk in The Emperor's New Groove and Blag in The Wild.

Prior to the events of Tales from the Borderlands, Hugo was the bitter rival of Rhys, both men shared a mutual resentment for one another and they both wanted to become powerful just like Handsome Jack. Vasquez is much more evil and ruthless man than Rhys, as he was willing to murder people to get the job he always wanted.

Once Hugo Vasquez became the boss of the Hyperion corporation he was shown to be a greedy corrupt boss. He has little to no sense of humor and takes things very seriously, but he gets enjoyment in humiliating or hurting his employees that show him no respect.

In Catch A Ride he finally meets his end, being shot in the chest by Vallory, after she deems him useless. Leaving his body to rot in Old Haven.

In Escape Plan Bravo Rhys, Finch and Kroger return to Old Haven to get Vasquez' body so Rhys can disguise as him to enter Helios.

It was later revealed that Vasquez struck a deal with Yvette. He was supposed to bring Rhys head back to Helios so that the superiors of Hyperion could download the A.I version of Handsome Jack inside of him, so they could collect the reward. And that lead her to betraying her former friends.

Vasquez in his office. 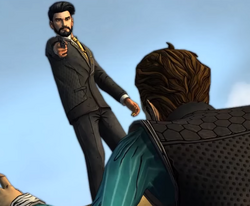 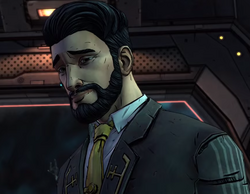