Villains Wiki
Register
Don't have an account?
Sign In
Advertisement
in: The Simpsons Villains, Male, Fallen Heroes,
and 23 more

Get back together with Bart by sewing him and his self back as conjoint twins (formerly).

Hugo Simpson II is the secondary antagonist of Treehouse of Horror VII. When he was born he was a conjoined-twin and later he was separated from his twin brother Bart a short time after birth. Hugo was supposedly the baby who tried to eat Bart's arm. His parents and Dr. Hibbert found out that his scar was on the wrong side, which was actually on the left side of his body, and that Hugo was the good baby, and that Bart had tried eating his arm, leading him and Bart switching places.

He was voiced by Nancy Cartwright, who also voices his original counterpart.

Bart, Lisa, and Maggie discovered Hugo after they heard strange sounds coming from the attic and after Homer spilled the beans about there being four Simpson children, As the "evil twin", Hugo had been confined to living in the attic of the Simpson home and once a week was given a bucket of fish heads to eat because he was the evil one. Hugo also did experimental surgery to prepare for his eventual reattachment to Bart, and created a "pigeon-rat" in the process. The family later learned, however, that Bart was actually the evil twin, as Hugo's scar from when he and Bart separated was on the wrong side. Bart then took Hugo's place in the attic and was fed fish heads, while Hugo moved downstairs to live with the family. Bart was let back down with the family after the dinner scene with Hugo sitting at the table.

The Simpsons: Hit and Run

In this 2003 video game, Hugo is one of the character costumes for Bart.

The Simpsons: Tapped Out

During the 2014 Halloween Event of the app-based game, Hugo was one of the craft prizes and had his own questline. He also returns in the 2015 Halloween Event.

In the first quest line, The Good Son, Homer mentions that despite his weird features, he still thinks of him like a son, which Hugo, understandably, is insulted by this, reminding Homer that he is in fact his son, being Bart's conjoined twin brother. Homer then offered to take Hugo out to Krusty Burger, although he declined, citing he's been on a strict diet of fish-heads, though he does offer to share his supply with Homer for dinner due to having extra. However, Homer skipped out of dinner, and ate chicken instead, causing Hugo to suspect that he's embarrassed by his presence. He also offered to walk Pigeon-Rat, viewing him as his only friend due to believing his family was embarrassed about his existence, although his "friend" actually didn't want to be seen with him either. Eventually, Marge and Homer apologized to him, and admitted that they were embarrassed in part due to his status as the evil twin, although Hugo is quick to remind him that he's in fact the good twin, which is apparently something the family, in particular Homer, keeps on forgetting, with Bart inferring it's due to Homer's overall idiocy. Hugo then privately believes all families have evil twins, and plans on trying to find his own place in the future.

In the second quest line, Bart is made to deliver the fish food upstairs by his parents (implied to be because Bart spoiled Homer's job by discovering Hugo in the first place, even though it was by that point established that Hugo and Bart's actual statuses were mixed up). Hugo then lets Bart have some of the fish, with Bart complaining about how things are going, before Hugo reminds him about how his own life was objectively worse. Hugo then offers to switch places with Bart for the time being, with Bart agreeing. Marge and Homer noticed this, with Marge worrying about it being clichéd, although Homer was more apathetic, citing that it either is permanent or they grow tired of it. Hugo then decides to take a walk as his first act of being in Bart's shoes, while Bart likewise looked forward to trying to claw the attic and make sinful abominations in Hugo's stead. Similar to before, Hugo also asks Pidgeon-Rat how it feels to be free, completely oblivious to the fact that his "friend" wants to get away from him and his stench. Hugo and Bart then talk about their day thus far, and both made clear they had a great day, with Bart merging Malibu Stacey and Radioactive Man, with Hugo complimenting him. Although Bart acknowledges that Hugo's the good twin, he's surprised he's willing to use live subjects since that's cruel, but Hugo indicates that he, or at least, he thought, Pigeon-Rat wanted to be spliced together (although they insist otherwise in their language). He then heads off to school, although his time there was less than pleasant, as none of the kids want to eat with him due to his meal and his more grotesque appearance, and even Skinner, who had otherwise taken offense to their implying that he gave them permission to be cruel, was overall disgusted with him. Hugo then returned home, only to find Bart very eager to reunite them surgically, ironically like what he nearly did to Bart earlier, causing him to beg for his parents help before Homer told them to shut up. Hugo ultimately decided to live back in the attic, thinking it was ultimately better there than the outside world after witnessing how cruel people can be, with Bart agreeing.

As a newborn child with Bart (Hugo is on the left, NOT the right).

His Great-Great-Great Uncle Hugo Simpson I, who he was named after. 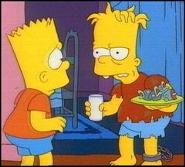 As he meets with Bart again. 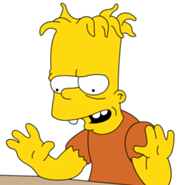 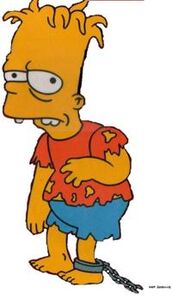