Become Batman's superior and successor.
"Save" Gotham in his own way.
Kill all the inmates in Arkham City.
Aid Ra's al Ghul with his goals (all failed).

He is a former psychologist at Arkham Asylum and Blackgate Prison who experimented on his patients before becoming the warden of Arkham City when he became a secret servant of the eco-terrorist supervillain Ra's al Ghul. His intention to create a legacy superior to Batman's, Strange plotted to prove himself as Ra's worthy successor by eradicating all criminal life in Gotham City and then the entire world in unjustifiable ways.

He was voiced by Corey Burton, who also played Dr. N. Gin in the Crash Bandicoot franchise and Count Dooku in the 2008 Star Wars: The Clone Wars series.

Several years earlier, using his skill of Psychology, Hugo Strange figured out Batman's secret identity, using this information he attracted the attention of the league of assassins, and Ra's Al Ghul decided to test him to see if he was worthy to become his successor. Providing him with near unlimited resources, Strange began his plan to wipe out all Criminals in Gotham to prove his worth. Working at Arkham Asylum, Strange began studying and spying on the inmates. Finding the Mad Hatter, Strange manipulated him into sharing his brainwashing secrets, by providing him with multiple young women, to be his Alices. Which he used to convince Warden Quincy Sharp he was the spirit of Amadeus Arkham.

Manipulating Sharp, before sharp became the Mayor of Gotham City, Strange made a deal with Sharp that if he cut off a part of the city for his plans, Strange would help with Sharp's political campaign, and that all Sharp had to do was look away and not question about it. Strange then used the League of Assassin's resources to make certain that Sharp became Mayor, allowing him to enact his plans with ease.

After Quincy Sharp becomes the new Mayor of Gotham City, Sharp decided to cut off a part of the city for the inmates to roam around. Hugo Strange was appointed to take care and keep an eye on the city. While he was doing that Strange was also studying Batman who he knew was Ra's favorite for his successor. After Arkham City was complete, Strange arrested everyone that was working for him (The Political Prisoners) and everyone who held any idea of his secrets, on false or flimsy charges to cover up the loose ends and left them to rot in the city. He even arrested the Mayor because he outlived his usefulness. He also created a special police force called TYGER to "help" maintain order in Arkham City, in reality they were brainwashed thugs, Strange had kidnapped and tortured.

Strange then began manipulating the events in Arkham City, while also studying the inmates, holding meetings with Two-Face, Penguin, Joker, and Mr. Freeze. He also began supplying Penguin and Joker (them being the two major warlords in Arkham City) with weapons, as well as the Lunatics (from Arkham Asylum) for target practice. In reality, they were, in fact, his failed brainwashing test subjects, who Strange had had lobotomized and placed in the Asylum to rot.

He betrayed Mr. Freeze, giving his wife to the Joker and giving him to the Penguin for him to add to his trophy collection. He also forced Catwoman into complying by threatening to have his guards shoot her adopted daughter, Holly. He then gave her the location of Two-Face's loot before telling Two-Face what she was up to. However, Strange met his match in the Joker, who blackmailed him into kidnapping doctors for him. Strange also hired the great assassin Deadshot to start murdering several political prisoners, and so he himself would die during Protocol 10. Following Black Mask managing to escape, Strange sent the TYGER Guards into the streets of Gotham to hunt him down and drag him back while also ordering security to be increased, by having gun turrets placed around the walls.

Finally, he had Bruce Wayne himself kidnapped and thrown into Arkham City. There, he met him and told him he knew who he really was, before trapping him in Arkham City. He also sent a squadron of guards to Wayne Manor so he could cement his victory. However, they were defeated by the efforts of Nightwing and Robin. During the gameplay, Strange kept on mentioning Protocol 10, and that it would start in ten hours. It turned out that Protocol 10 meant to bomb down at Arkham City and kill all the inmates in Arkham City. It was later confirmed that Strange was working with someone much more powerful than he. However, Batman managed to break into Wonder Tower. His ego getting the better of him, Strange was convinced he had won, and proudly declared over the speakers to Batman.

As such, Batman succeeded in defeating all of his TYGER Guards, resisted Strange's attempts to break him with psychology, and confronted him. Strange tried one last time to break his opponent, but Batman beat him up and managed to shut down Protocol Ten after only the first phase was complete. Strange began to boast that this was only the beginning and soon he would control forces beyond comprehension, before he was literally backstabbed by Ra's Al Ghul for failure. Ra's dismissed Strange, telling him that all he had proven was that Batman was better than he. Dying and deciding to take both of them with him, Strange activated Protocol 11, which was to self-destruct Wonder Tower. Doing so, Wonder Tower exploded, killing Strange in the process, but Batman and Ra's managed to escape with their lives (but not long in Ra's case). 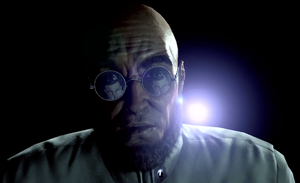 Strange revealing himself to Wayne. 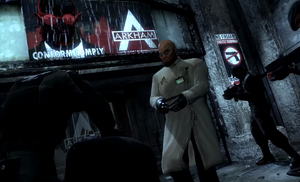 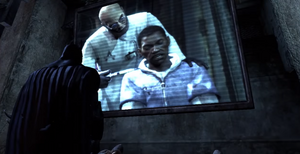 Stranges talks to Batman while holding a hostage. 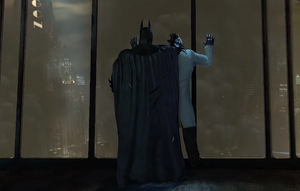 Batman forces Strange to look upon the chaos he created, which the latter believes is glorious. 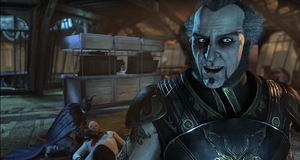 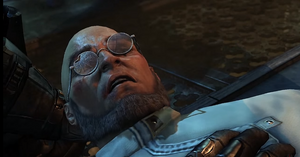 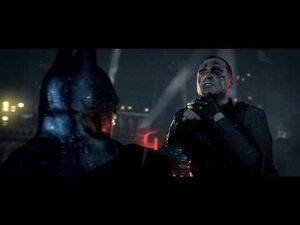 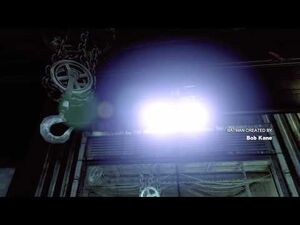 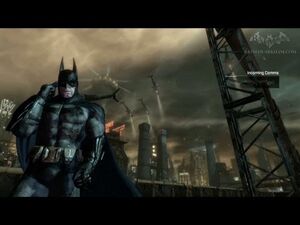 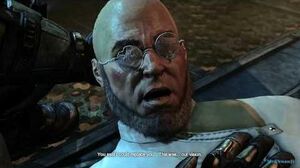