Turning his limbs into firearms

Eradicate all the life forms on Earth

Huitzil (named as Phobos in Japan) is an army of yellow robots created by Pyron in order to kill all the living creatures of Earth, one of them is a sub boss in Darkstalkers The Night Warriors and a playable character in Darkstalkers Revenge and in Vampire Hunter/Savior 2.

In the Ova the Huitzil's are grey instead of yellow, they first appears fighting Morrigan and Demitri but they were destroyed by them.

Through the Ova the Huitzil's shows that they were building a giant, stronger version of them.

During the final moments of the Ova all the remaining Huitzil's, including the giant one betrayed their creator stating that Earth doesn't need a destroyer, but the alien easily dispatched all of them except the giant one which survived the battle and remained in space to check the earth situation.

In these games it is revealed that they killed all the dinosaurs in the past and went to an unknown deep underground where they slept for a long time, Around 520 A.D they were found and used the Aztecs for many purposes.

After many years they were put into the Teotihuacan ruins and went into a long sleep again, until their creator Pyron returned to Earth, one of them awoke again and prepared to complete its original orders.

After the defeat of Pyron he malfunctioned and carried out the order to protect a child named Cecil, which possesses the power to controll all the other Huitzil's. 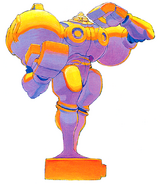