Hulex are brownish cockroach/flea-like creatures with one purple eye, antennae atop their heads and large jaws. They have six limbs, two functioning as arms whilst four of them appear as legs.

Food Around the Corner

They land on a planet which is actually Gravattack (a form which Ben is mutated into). They start to dig into Gravattack's core which causes him pain. Max Tennyson wonders if he is okay. Driba uses a machine that shrinks Rook and he grapples into Gravattack. Rook tells the Hulex to stop but they start attacking him. Rook defeats some of them. They start to throw grenades at him which can be seen on Gravattack.

Later, the Hulex Colonel and the rest of the Hulex are stuck on a white surface. They jam the flag into it which is actually Poltroon. Poltroon starts to scrath himself. When he sees the Hulex, he falls down.

The Hulex Workers are the Hulex minions and subspecies that obey their colonel. They wear hardhats, carry pickaxes and other mining equipment.

The Hulex Colonel is the unnamed leader of the Hulex.

The colonel seems to be very fond of his work and he was willing to sacrifice members of his species and himself to get his job and goals done. This has been evident when he kept digging into Gravattack's core. He was aware of what would happen and that him and his workers will survive, despite Rook warning him. 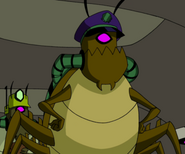