Leader, father and founder of the Hulk Gang

Bruce Banner, or better known as The Hulk, is the final antagonist of the graphic novel Old Man Logan. He is a darker and irredeemably evil alternative version of the mainstream Hulk, who is usually only seen as occasionally villainous. He is also the founder, leader and father of the Hulk Gang, and Wolverine's dangerous archenemy.

Little to nothing is known of this version of Hulk's backstory, but presumably he had an origin similar to that of his Earth-616 counterpart. He mentions alledgedly that years of gamma exposure had negative effects on his psyche, causing him to become progressively more and more villainous. Following the deaths of most of the world's superheroes, Bruce Banner chose to inter-breed with one woman who would not be poisoned by the gamma radiation he gave off: his own cousin, Jennifer Walters, aka She-Hulk. From this union was begun a family of Hulk-like thugs known as the Hulk Gang, who would go on to bully and extort others, including the family of a retired Wolverine.

After members of the Hulk Gang killed his family simply because they were bored one day, Wolverine snapped and almost slaughtered the entire Hulk Gang, including his family's killers and Jennifer Walters. Soon only an elderly Bruce Banner and the family's most recent addition in the form of an infant remained. Surprising Wolverine with his superhuman strength, the elderly Banner attacked him and held his own, noting how he and Wolverine could finish their ages-long rivalry once and for all.

As the fight continued, Banner eventually transformed into his "Hulk" form, which was a massive beast the size of a three story building that swallowed Wolverine whole. By this point, the other survivor of the Hulk Gang returned and learned from Hulk that they and the latest baby were the sole survivors of Wolverine's rampage. That soon changed however, when Wolverine tore his way out of the Hulk's stomach, killing him.

In contrast to the usual depiction of the Hulk as a tragic and sometimes violent but ultimately heroic and well-meaning individual who simply wishes to be left alone, this version of the Hulk was pure evil, being not only incestuous and sadistic, but also being the leader of a largely amoral and cruel gang of thugs who among other things bullied and extorted Wolverine's family and then killed them one day simply because they were bored. If the Hulk was aware of or upset by such actions, he didn't at all show it when he was alive. Rather he seemed to revel in the depravity he and his family so readily indulged in, also bragging about his incestuous relationship with his cousin Jennifer.

Between all of the above as well as not having occasional moments of heroism (like Ultimate Hulk and 616 Hulk) and not even having a sympathetic backstory (like Maestro), it could be said that this is the single most evil version of the Hulk in the Marvel Multiverse, perhaps even more than his zombie counterpart from Earth-2149. 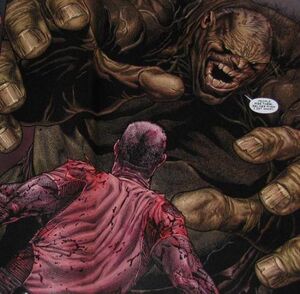 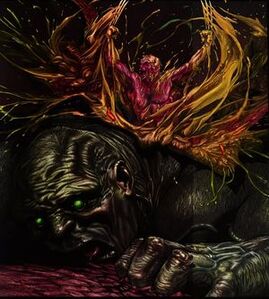