Though the Hulk in Earth-616 (aka the original Marvel universe) has occasionally served in an antagonistic capacity, these moments are the exception not the rule, and most of the time the Hulk in 616 is clearly the heroic chaotic good alignment or at the very least, chaotic neutral.

In the Ultimate Marvel universe however it is more the opposite, as the Hulk is regularly depicted as not only being incredibly destructive and violent but also downright sadistic, and here rarely acts in a heroic manner. Furthermore when the Hulk does act in a heroic capacity (such as when he helped stop the Chitauri invasion) his motives are rarely if ever benevolent or altruistic but rather because he has been manipulated by either the Ultimates or Bruce Banner.

The Hulk's first and by far one of his most infamous villain moments in the Ultimate Marvel universe occurred after Bruce Banner snapped following continued verbal and emotional abuse from his estranged girlfriend Betty Ross. Transforming into the Hulk, Banner's rampage saw hundreds of innocent people killed before the Ultimates were able to put him down with the aid of Thor, who began working with the team thereafter.

Fearing what would happen if the truth of the Hulk was made known to the public, S.H.I.E.L.D. put Bruce Banner in their custody and contained the truth of his being the Hulk. The Ultimates subsequently became national heroes for stopping the more sinister Hulk.

Both a villain and a "hero"

Following this, the Hulk would have other villainous moments, such as his battling Wolverine and ripping him in two. On the other hand though, Ultimate Hulk also (albeit unwittingly) helped stop the Chitauri invasion and later helped fend off the Liberators, battling and brutally killing his opposite number Abomination.

During the events of Ultimatum Hulk became controlled by a mystical force that caused him to become feral again, where he came into conflict with Spider-Woman and attacked the Sanctum Sangtorum following Doctor Strange's death, and ended up destroying it. Following his being freed from the magic's influence Hulk was blackmailed into working for S.H.I.E.L.D. again, but his current status is not known beyond his now serving on the Dark Ultimates. 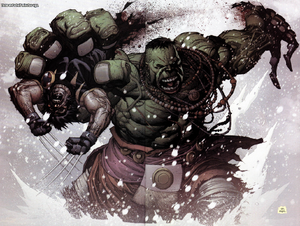 The Hulk ripping Wolverine in half. 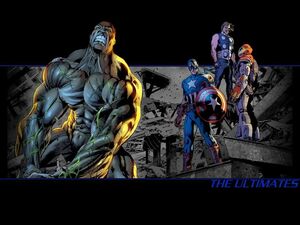 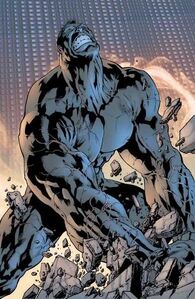