The Hitchhiker's Guide to the Galaxy

Usurp Zaphod Beeblebrox's place as Galactic President and presumably instate a dystopian empire with the Point of View Gun.

Mr. Humma Kavula is a minor antagonist in the Disney/Touchstone film adaptation of The Hitchhiker's Guide to the Galaxy. He is a political rival of Zaphod Beeblebrox.

He was portrayed by John Malkovich, who also played Dave in DreamWorks' Penguins of Madagascar, Mitch Leary in In the Line of Fire, Cyrus Grissom in Con Air, Galbatorix in Eragon, Tom Ripley in Ripley's Game, Quentin Turnbull in Jonah Hex, Pascal Sauvage in Johnny English, and Vicomte Sébastien de Valmont in Dangerous Liaisons.

Humma Kavula was running for President and its unknown what his office would have done with the destruction of Earth - presumably, given his evil nature, Kavula would have allowed it to happen, or he would have conquered Earth and enslaved humanity, but either way, Kavula did his best to win the Galaxy over to him, saying Beeblebrox was a moron and he would never properly run the Galaxy. Humma eventually lost, because he was officious and treacherous by nature, but Zaphod, despite his arrogance, bad dress sense and egocentricity, was honest and decent. The loss angered Humma and he took up being Cult Leader for the Great Green Handkerchief Cult on planet Viltvodle VI.

The inhabitants of planet Viltvodle VI were advanced in the fact that they invented aerosel deodorant before the wheel, but otherwise they were backward and superstitious, so it was easy for a man like Humma to manipulate them. He used to be a space pirate in his youth and still kept many souvenirs from it. He enjoyed robbing spaceships and presumably went all out to capture government ships, then possibly blamed Zaphod for it. Humma refers to this as "His former life," indicating he is immortal.

When the Improbability Drive malfunctioned when en route to planet Magrathea, they found themselves in orbit around planet Viltvodle VI. Thus, Zaphod got angry, remembering the political campaign, and he yelled that Magrathea would have to wait because he had "a score to settle on this planet." Zaphod began yelling "HUMMA KAVULA!" confusing Arthur Dent who believed he was just swearing.

Upon planetfall, Arthur eventually met the Cult of the Handkerchief and realized Humma Kavula was their high priest, and he confessed his embarrassment to Tricia. During the ceremony, Humma praised the deity's powers and begged for Judgement Day to come upon them all, and then ended with "Bless you" after the entire Cult sneezed on each other.

Humma then was eating dinner in his stateroom when Zaphod entered. Humma greeted Zaphod civilly and he asked what the President wanted from him, pretending to be humble. Zaphod said surely Humma knew why he was there, Humma pretended he didn't. Zaphod reminded Humma of his political insults to Zaphod in the campaign and then to his shock Humma revealed the stolen treasures he had kept from his space piracy days as well as the alarming fact that Humma had no legs, he in fact had arachnid like metal legs under his robe. Humma was very conceited and revealed his evil nature in wanting to destroy Zaphod's office. He then said that Zaphod was greedy and a fool, and entrusted him with retrieving the Point of View Gun from planet Magrathea. Zaphod said "Fine, I'll get you your Gun, just give me the coordinates," and Humma asked what would ensure his return. Zaphod said his word as President was good enough but Humma sneered and said he needed a hostage, alarming Arthur and Tricia, but then they were relieved that Humma's "hostage" was Zaphod's second head. 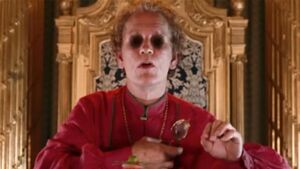 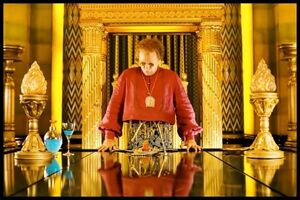 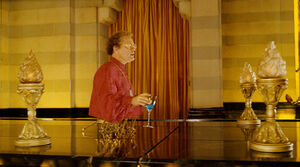 Humma on his legs walking across the table like a spider