The Thousand-Year-Old Egg of Destiny
Egghead (by Jack)

Humpty Alexander Dumpty, also known as Humpty Dumpty, is the tritagonist and the central antagonist of DreamWorks' 13th full-length animated feature film Puss in Boots, an spin-off of the Shrek film series.

He is one of Puss' best friends after his ordeal in the orphanage which ended when Puss stopped the culprit. After doing time at the San Ricardo prison, Humpty hires Jack and Jill so they can help him retrieve the magic beans to get the Golden Geese and become rich, while planning his revenge against Puss.

He was voiced by Zach Galifianakis, who also voiced The Joker in The Lego Batman Movie.

After being adopted by Imelda and cared for in an orphanage, Puss and Humpty befriend each other after Puss protects Humpty from orphanage bullies and the two make a brotherly oath. Humpty explains to Puss while looking at clouds how he wants to become a golden egg and how he feels he belongs up there. Soon afterwards, they begin a quest to find three magical beans (from the fairytale "Jack and the Beanstalk"), but their attempts fail and they soon grow rebellious as they become teenagers.

After being caught several times, the two then converse on the rooftop. Humpty explains how he is fed up with having to live in the orphanage and throws a rock out of frustration, which inherently lands on a lock encasing a bull. The lock unlocks and releases the captivated bull who immediately begins charging at Comandante's (one of the chief guards) mother. Upon instinct, Puss leaps into action before Humpty could stop him and he steers the bull away from the old lady. He is then granted as a brave hero by everyone in the village and agrees to stop his dastardly ways.

However, Humpty instantly continues stealing and rebelling to the point where he is being chased down by guards. Humpty wakes up Puss one night in order to help him "escape". They reach a wall and Puss lifts him over on command, but then realizes it's a bank. Humpty comes out with bagfulls of money and tries to escape. Puss is appalled and the two begin arguing.

The guards stop them and Comandante realizes Puss and accuses him of theft. Humpty uses the wagon to escape and the two escape the guards, but soon come across a bridge. The wagon collapses and falls into the river below the bridge. Humpty rolls off and struggles to get up. The guards begin to catch up and Humpty pleads for Puss to help him up. Puss decides not to and jumps of the river and away from the guards and spends the rest of his years renegade, and Humpty is arrested. Since then, he wanted revenge on him, and hired Jack and Jill to hunt him down, however they secretly plan to betray him.

Years later, Puss goes on a heroic adventure teaming up with mastermind Humpty Dumpty and street-savvy Kitty Softpaws. He learns that the outlaw couple Jack and Jill have the magic beans he's been looking for most of his life, beans that can lead him to a giant's castle holding valuable golden goose eggs. When Puss tries to steal them from the outlaws' room, a masked cat (Salma Hayek) interrupts.

Both fail and escape, and Puss follows the cat back to the Glitter Box, a club, where they have a dance-off and a sword fight, ending when Puss hits the masked cat in the head with a guitar. He learns that the masked cat is Kitty Softpaws, and is shocked to learn that she is a girl. She is allied with none other than Humpty, a talking egg and Puss' long-estranged childhood friend from the orphanage where he was raised.

Puss tells Kitty of his feelings of betrayal for a youthful misadventure when Humpty tricked Puss into helping commit a crime. Humpty attempts to convince Puss to join them in finding the beans and retrieving the golden eggs, which he does.

The trio steals the beans from Jack and Jill and elude the angry outlaws in a canyon chase. As Humpty leads his compatriots to the spot where they must plant the beans, Puss and Kitty's relationship begins to grow from rivalry into friendship. The trio ride the fast-growing beanstalk into the clouds where, Humpty explains, they'll find the castle of the late giant, while trying to avoid a fearsome monster called the Great Terror who guards the Golden Goose. When they realize the golden eggs are too heavy to carry, they steal the Goose — which is just a gosling — and escape the castle and the Great Terror. While celebrating their victory, the group is ambushed by Jack and Jill, who knock Puss unconscious.

When Puss wakes up, he tracks Jack and Jill back to his old hometown, where he learns that the entire heist was a plan by Jack, Jill, and Humpty (who is revealed to be Jack and Jill's boss) to lure him home to be captured as revenge for abandoning him to the authorities when Humpty's youthful heist went bad. Even Kitty was involved in the con. After pleas from his adoptive mother, the head of the orphanage, Puss turns himself in to the guards while Humpty donates many golden eggs to the town and becomes a hero.

While in prison, Puss meets the original Jack from the Jack and the Beanstalk (a.k.a. Andy Beanstalk) story who warns him that the Great Terror is in fact the Golden Goose's mother, and it will stop at nothing to get its child back. A repentant Kitty helps Puss break out of prison and tells him that she loves him more than gold. Puss convinces Humpty to help him fight off the Great Terror, saying he knows Humpty is a good person at heart, and he will be forgiven if he helps save the town. The Great Terror arrives, revealing itself to be a giant goose, aka Mother Goose.

Using the Golden Goose as bait, Puss and Humpty lure the Great Terror out of the town, but Jack and Jill intervene and betray Humpty on the spot, revealing to have manipulated him to get the Golden Goose for themselves. They are about to kill Humpty and destroy the carriage, only for Kitty Softpaws to battle and hold them off, until the Great Terror finally crushes them, inadvertently saving Puss and Humpty. Humpty and the Goose are knocked off a bridge during the chase with Puss holding on to them. Humpty knows Puss cannot hold both of them, and he lets go, sacrificing himself to save the Goose and the town. Humpty's shell cracks open to reveal that he was a golden egg on the inside. The Great Terror then takes the Goose and Humpty away back to the giant's castle.

Puss is forced to flee because he is still an outlaw, but his efforts to save the town make him a hero among the townspeople. Puss and Kitty escape the guards once more, and Kitty says she will see him again soon, showing that she has taken his boots. In the epilogue, Jack and Jill are recovering from their injuries after being crushed by the Great Terror, Humpty is shown once again in his regular egg form, wearing his golden egg suit, as he rides the Great Terror into the clouds, and Puss and Kitty head back to dance at the Glitter Box, where they finally kiss.

Being a mastermind, Humpty is a very ingenious and manipulative trickster who can invent extraordinary devices and manipulate unwitting people like Puss into doing his dirty work. He is also quite selfish and somewhat backstabbing, despite his intellect, Humpty was still very foolish to betray Puss and had him framed for his crime and later excusing Puss of betraying when it was he who betrayed him and his own fault for making him a look like a criminal and later got the town destroyed just because he did not want to return the goose. Despite his bad qualities, Humpty has a heart of gold and considers Puss a brother; he even sacrificed himself to help save the town after finally releasing his foolish actions. He is also very shown to be a dependable hero.

Humpty in the film credits. 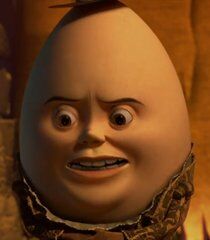