Skilled at disassembly and reassembly

Disassemble and reassemble anything he deems broken.

"Fix" anything he gets his hands on.

Humphry Dumpler (nicknamed Humpty Dumpty) is a villain from the Batman series. He isn't a big-time criminal. He is obsessed with mechanical items. He likes taking them apart and then putting them back together but doesn't have the knowledge to put them back together the right way. He also joins the Secret Society of Super Villains.

Humpty Dumpty doesn't appear in the video game Batman: Arkham Asylum. One of the Riddler's riddles revolves around him. He has an entry in the character Bios. His profile states: An obese, bald man nicknamed “Humpty Dumpty” for his egg-like form, Humphry Dumpler is obsessed with taking things apart and putting them back together.

His crimes at first were minor break-ins, leading to small mechanical items no longer functioning due to Dumpler’s inability to adequately reassemble them after taking them apart. But soon his obsession grew to the point that major disasters occurred in Gotham, and Dumpler’s crimes also extended to a gruesome attempt to “fix” his abusive grandmother by dismembering her and then attempting a Frankenstein-like reassembly. At Arkham, he is a model inmate, his quiet nature and imposing physique inuring him to the madness surrounding him.

He appears in the show Beware the Batman in the episode "Broken". He used to be an accountant for the mob and was going to testify against Tobias Whale but Whale tries to get him killed. He seeks revenge on Whale by kidnapping his men and trapping them in statues that resemble toy soldiers and are armed with giant shotguns that actually fire.

In this show, he is voiced by Matt L. Jones.

Batman finds some of these statues in places randomly in Gotham and manages to free them. Eventually, he captures Whale himself. Do to Commissioner Gordon's interference he breaks into his house a grabs his daughter. Gordon tries to attack him but Humpty knocks him out and takes him. Batman tracks him to his headquarters that looks like a castle. Humpty has an army of his statues attack him while he fires with a machine gun on the roof.

Batman is able to trick him into firing at the statues by hiding behind them. He then finds out that Tobias Whale and Gordon are trapped in two of the statues and Batman is able to save them in time. He knocks out Humpty's gun and chases him to the top of the castle. Humpty then recites the Humpty Dumpty nursery rhyme and then jumps. Batman tries to talk him out of it but fails. It is then revealed that it was really a robot who jumped with a voiced recording.

He returns in the episode "Games" where he kidnaps Batman, Katana, Tobias Whale, Commissioner Gordon, and Mayor Grange. They all wake up in a room with a corpse in it. Each of them has a clue and Humpty tells them that one of them is responsible for the murder and they have to solve it if they want to live. Each time they solve part of it they move onto a different room each one has a complex trap which is based off a game such a giant eggshell, falling floor tiles, flying book, and spikes. The group also slowly turns against each other.

After they get far Humpty traps them and brings out unconscious Ernie Crosky a man who mistakenly smuggled weapons for Tobias Whale, with a disguised Katana, stopped by Batman, arrested by Gordon, and sent to prison by Grange. Crosky turned out to be innocent the whole time and was taken away from his family. Humpty tells the group that they all ruined Crosky's life just like how they ruined his own. He tries to get Crosky to kill them but he refuses so Humpty tries to do it himself. However, Batman knocks him onto one of his own traps which knock him out. Humpty is then taken to Blackgate Prison along with Whale and Crosky is able to return to his family. 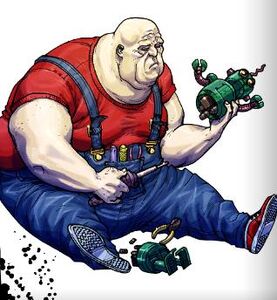 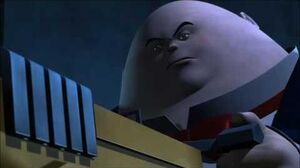 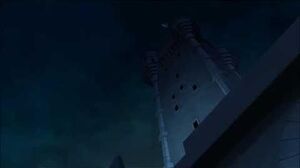 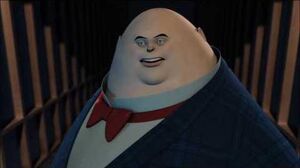 Retrieved from "https://villains.fandom.com/wiki/Humpty_Dumpty_(DC)?oldid=4343345"
Community content is available under CC-BY-SA unless otherwise noted.