Leader of the Purple Dragons gang

Minion of the Shredder

Aid the Shredder in his diabolical goals (formerly; failed).

Hun is one of the secondary antagonists in the first three seasons and later one the three main antagonists of season 4 (alongside Karai and Bishop) in the 2003 and a minor antagonist in the 2012 Teenage Mutant Ninja Turtles cartoon series'. He is the leader of the Purple Dragons, the archenemy of Casey Jones and (in the 2003 version) the right hand of the Utrom Shredder, before he was later replaced with Karai following her return. He also appears in the Mirage comics and in IDW Comics in the latter as Arnold Jones' Casey's father.

Hun started his criminal career in his teen years and became the leader of Purple Dragons. He and a group of Purple Dragons burned down the store of Arnold Jones (Casey's father) after he refused to pay the Purple Dragons protection money. Hun told Casey to tell his father to pay up next time or else. However, Arnold went to the police which made Hun kill him. Sometime later, the Shredder found him and took him as a protege after he realized his potential. In the beginning of the 2003 series, he left his operations to Johnny and Dragon Face while he serves the Shredder. In "Attack of the Mousers", he was sent by the Shredder to bring Dr. Baxter Stockman to the Foot HQ and gave him his punishment by drilling out his left eye. He delivered the Sword of Tengu to Saki in "Darkness on the Edge of Town" and punished two Foot technicians for losing it to the TMNT. Hun was later ordered by the Shredder to team up with Stockman to find info on the Turtles in "The Way of Invisibility". Hun let Raph escape so the Foot Tech ninjas follow him to the other Turtles. The TMNT defeated the ninjas and Baxter Stockman blamed Hun for the failure of the mission. However, Stockman was taken away by two Foot Tech Ninjas. Hun reported to Oroku Saki that based on his interrogation, the Turtles don't know anything about Saki's enemies. Oroku Saki decides that the Turtles may be useful to him when the time is right.

First Battle with the Turtles

In "Fallen Angel", he hosts the Purple Dragons cage match. He knocked out Casey Jones and took him hostage, intending to let the winner of the cage match be the one who gets to kill him for all the trouble he caused for the Dragons. Later he fought the Turtles. In their first fight against him, he actually overpowered them, they were only saved by Casey Jones. Casey later defeats Hun and battle and almost kills him for what he did to his father before Angel stops him. When asked why, Angel states that killing Hun would be a big mistake as it would make Casey no better than him. He later returns in the first part of "The Shredder Strikes." Here, he fights the Turtles all at once and does considerably well despite being out numbered. He loses after Leo, out of anger after seeing Hun about to kill Raph, kicks him off the roof they were fighting on. Hun is alive, but is out of comission during the second part.

In the 2012 series, Hun is far different from his original counterpart. Instead of being a physically imposing giant who could take on all the turtles at once and Shredder's right hand man, this version of Hun is a homage to famous martial arts master and movie star, Bruce Lee, being similar in design, voice and fighting style. That said, from what little the audience sees from him he is still a threat.

Hun first appeared in "Casey Jones vs the Underworld", introducing himself to Jones as the new leader of the (just defeated) Purple Dragons during a bank robbery. Hun then easily defeats Casey and made off with the money, along with his cohorts. Hun later appeared delivering chemicals to Shredder, who complimented his success, martial arts mastery, and leadership skills. Hun then offered to show Shredder around the Alumond Chemicals factory, as it made the chemicals needed for his mind control formula and was on Purple Dragon territory. His tour was interrupted by Casey Jones, who began to fight him for a second time after the turtles showed up. He was defeated when Casey Jones pushed him off a balcony into a vat of chemicals.

Hun appeared again in "Meet Mondo Gecko", fighting Casey, Michelangelo and Mondo Gecko, only to be defeated again with Mikey and Casey having to stop Mondo from stealing his wallet.  Later, Hun appeared in the audience of Fishface's underground race, alongside the rest of Shredder's henchmen, certain mutant villains, and top underworld figures. He later leaves the race in disappointment after Mikey, Casey, and Mondo barely win the race and the other Turtles show up.

In "Broken Foot", Shredder hires Hun and the Purple Dragons to guard his money stocks from Karai and Shiniagami. Hun and the Dragons are surprisingly able to beat them in combat, however, they are ultimately defeated when Leonardo joins the fight. Beforehand, Hun shows how loyal he is to the Shredder, outright calling Karai a "spolied little girl" for her attempts at revenge.

In "Bat in the Belfry", Hun briefly appears with the Dragons being easily defeated by Casey Jones, Michelangelo (dressed as Turflydle), Wingnut and Screwloose. This is his last appearence during the series as he does not even appear during the final battle with the Turtles and Shredder. Hun was arrested by the NYPD and possibly put in prison for life as he never returned again.

Hun appeared in a Mirage issue special where he fought Casey as the leader of the Purple Dragons and the murderer of his father.

Hun appears in the IDW version where he was the founder and leader of the Purple dragons but with his original identity of being Arnold Jones as Casey's father. He fell in love with Caset's mother who sadly died from labor and later became a villain again also drinking alcohol and abusing Casey in a fit of rage. 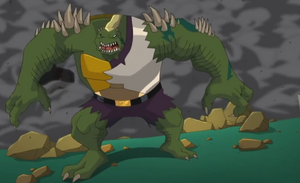 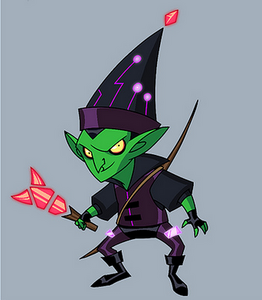 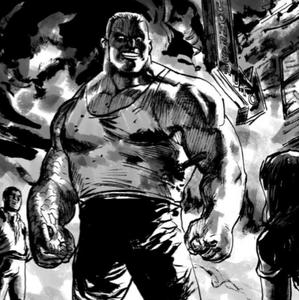 Hun in the Mirage Comics 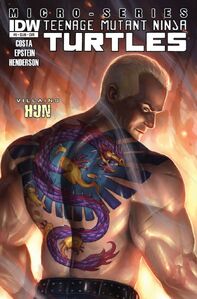 Hun in the IDW comics. 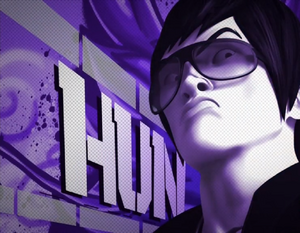 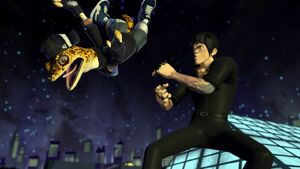 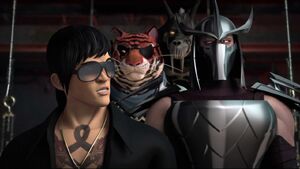