Monkey King: Hero is Back

Ruler of the mountain trolls

Hun Dun the Demon King, or Hundun, is the main antagonist of the 2015 animated Chinese film Monkey King: Hero is Back, which is a loose adaptation to the 16th-century Chinese classic novel Journey to the West by the late Wu Cheng'en. The tyrannical ruler of the wretched mountain trolls, Hun Dun seeks immortality at all costs.

He was voiced by the Chinese voice-acting veteran Tong Zirong in the Chinese version, and Feodor Chin in the English version.

Hun Dun is the ruthless leader of the mountain trolls who is on a quest for immortality. Through unknown means, Hun Dun concludes that children were pivotal to his goal, and for a majority of the film, he sends his minions out to invade villages, capturing any child they see. An alchemist practitioner, Hun Dun intends on sacrificing the captured children on the Day of the Total Solar Eclipse and extracting their essences to create an elixir thereby extending his own life. When two of Hun Dun's lackeys inform him that a "monkey-faced man" had stopped them from capturing a young girl, Hun Dun disguises them as humans and sends them out to seize the girl.

Liuer, a young monk, and the group decide to retire for the night, and they come upon an inn. The inn turns out to be an elaborate illusion created by the Demon King who proceeds to soundlessly defeat the group upon seeing that Sun Wukong was weakened by his imprisonment. Succeeding at obtaining the young girl, Hun Dun triumphantly returns to his lair. Liuer, saddened by Sun Wukong's unwillingness to save the girl, takes it upon himself to save her, and he runs off. As Hun Dun was preparing to dip the cage containing the imprisoned children into a large alchemy furnace, Liuer - with the help of his shifu, Fa Ming - create a diversion, causing the cage to nearly fall off the ledge. Infuriated, Hun Dun grabs Liuer by the neck and strangles him, angrily demanding that he tell him where Sun was. As Liuer was nearing the brink of unconsciousness, he catches Sun Wukong within the corner of his eye. After a lengthy battle between the two martial artists, Hun Dun seemingly falls to his death.

However, it is revealed that Hun Dun had transformed into a worm-like monster apparently from absorbing energy from the solar eclipse. Now a brutish force of pure rage, Hun Dun furiously attempts to murder the cast in the most gruesome of ways. Despite Sun Wukong's pleads, Liuer attempts to defend him only to find himself on the receiving end of a massive boulder. Believing Liuer to be dead, Sun Wukong regains his powers and overpowers the transformed Demon King. Hun Dun ultimately combusts into a bright wave of light, thus ending any chances of him gaining immortality. 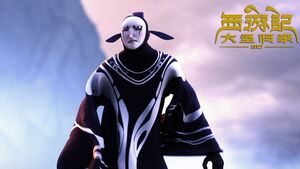 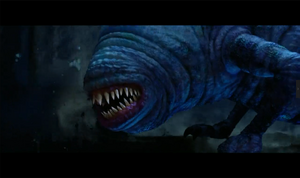 Hun Dun upon absorbing power from the solar eclipse. 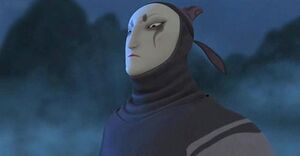 Retrieved from "https://villains.fandom.com/wiki/Hun_Dun_the_Demon_King?oldid=3868883"
Community content is available under CC-BY-SA unless otherwise noted.