Hundreds of years ago

Disrupt the peace between Fairies and Humans

Defeat the Turborangers and end the normal world.

The Hundred Boma Tribes are the main antagonistic faction of Kousuke Sentai Turboranger. They oppose the Turborangers because they are descendents of humans who with fairies locked their chaotic species away.

The Hundred Boma Tribes is a species that originated on Earth but with several tribes that were united by tyrannical rule. Mayhem was caused by them to disrupt the peace that fairies had found with humans and therefore it sparked a war. There were many casualties on both sides as many fairies perished as a result along with the Boma Tribes who were all sealed away for their crimes. Through the war certain Boma members like Ruffian Boma defected due to purity and regret over their actions and ultimately peace was achieved. Although due to human ignorance of fairies and their pollution the seal weakened one Boma at a time as the leadership was freed from their slumber. The tyrannical leader being Great Boma Emperor Lagorn who had several generals being Dark Boma Zimba, Princess Boma Jarmin, Boma Doctor Ledha, and Rage Flying Boma Zulten. Leadership was totalitarian with nobody getting away with defying the emperor Lagorn. Ruffian Boma mentioned before was hunted and brainwashed in fact for this very reason. That aside they were opposed by high schoolers that became vehicle themed Turborangers and Boma after boma started to die just as they were released. Wandering Boma Yamimaru and Kirika (much later) came on the scene and became more prominent as Boma members once Zimba, Jarmin, and Ledha were cruelly sentenced to do or die punishments by Lagorn. The Wandering Boma were xenophobically exiled for being human hybrids and treated lowly in the Boma cast system. At one point of time Lagorn was overthrown and "finished" by the heroes but the Wandering Boma duo who controlled soon learned he was draining their conflict and returned as Neo Lagorn after being a pile of flesh. Soon after the boma pack was going to destroy the world before the Turborangers ended it for good.

The Hundred Boma Tribes wanted to cleanse the Earth of anyone but themselves, wanting to be the sole species on the planet. Humans and Fairies and their peace stood against their chaotic belief of absolute rule and thus needed to be eliminated in their eyes. Modern humanity ironically did this for them partially by destroying all but one fairy sheelon who trained the Turborangers. Then their intent began to be to sow destruction in the modern world and defeat the newfound enemy of the Boma tribes. In addition, ending the Wandering Boma became another priority as they were considered more inferior than ordinary Boma since they were in some aspect humans. Under Yamimaru and Kirika not much changed except for the fact that the Wandering Boma were no longer cast aside. 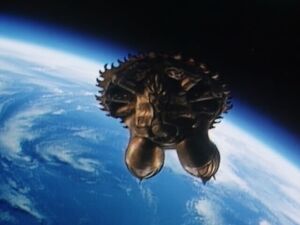