Get Gustav Geldsack to pay him (failed)

Hypnotist
Hunfredo is a one-time antagonist in the Austrian TV-show "Tom Turbo". He is a hypnotist who was hired by Gustav Geldsack to hypnotize a skier into praising Geldsack's ski as the best.

Hunfredo is portrayed by Florian Wotruba.

Later, Hunfredo was phoned by Geldsack who demanded to know what he did to his secretary. Hunfredo told him to pay him first. Geldsack told him to come to the ski race, Hunfredo refused and tried to hypnotize Geldsack into bringing the money to him, but the business man was immune to Hunfredo's hypnosis.

Hunfredo then arrived at the race, looking for Geldsack. Tom picked him up at the entrance, pretending to be a service robot that would bring him to Geldsack. He then drived like crazy, telling Hunfredo to lift the hypnosis from his three victims. Hunfredo agreed to do that and confirmed to a news reporter and the others what he did. This allowed the original news reporter for the ski race, who was replaced when nobody believed him about something being wrong, to take over the report. Hunfredo is seen walking away chatting with the other reporter. 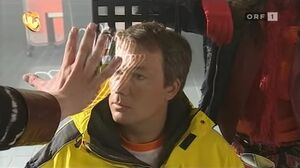 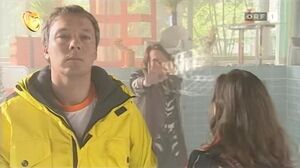 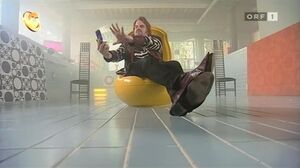 Hunfredo trying to hypnotize Gustav Geldsack on the phone, who turns out to be immune. 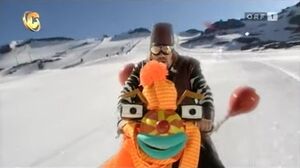 Tom Turbo driving like mad to force Hunfredo into confessing 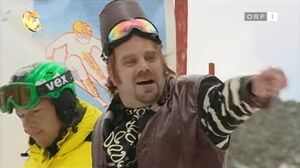 Hunfredo confessing what he did 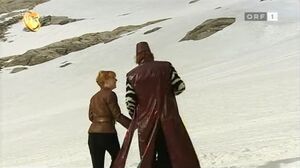 Hunfredo leaving with the news reporter.