The Hunter is one of the supporting antagonists in the Left 4 Dead franchise. It is a Special infected that has the ability to jump on a Survivor and the victim unless another Survivor knocks him off.

The Hunter appears in a faded blue sweatshirt and brown sweatpants. His hoodie is always pulled down over his face, which, on close inspection, reveals that he has no eyes. What remains of his eyes is the white glow seen from Common Infected in the dark. The lumbs of the Hunters outfit is battened down in duct tape.

The Hunter is primarily identified by his distinctive scream or growl that he uses mainly when he jumps on his victim. The Hunter is the only Special infected that doesn't make any noise while in a passive state.

The Hunter is the least visibly mutated Special infected and resembles a Common infected with a hoodie. The infection he posseses appears to be linked to male infected as in the two current Left 4 Dead games the Hunter is always male. The infection has also granted him lower-body strength. While it does not possess the muscle mass of the Tank, it is able to leap and bounce off of great distances. The decreased pain response visible in all infected also results in the Hunter not having perpetual lactic acid muscle overexertion or impact damage after suffering a high fall. At the same time, there appears to be a sort of muscle delay after an initial attack (post-attack recharge) where the Hunter is not able to move as swiftly as before. One of the most notable observations is the Hunters lack of eyes. Whether this was self-inflicted (if his eyes were clawed out), a by-product of the infection, or both, remains unknown.

Due to the Hunter not having eyes, it is likely it is gifted with the ability to sense things that are nearby. It is also possible that the Hunters screeching noise is its own echolocation method. He might also use scent to telk apart an infected from a Survivor. As with the other Special infected, the Hunter is not distracted by pipe bombs and car alarms that typical infected would be attracted to. The Hunter also appears to be the only infected with a self-defense reflex; it will jump away to safety if overwelmed and attacked. 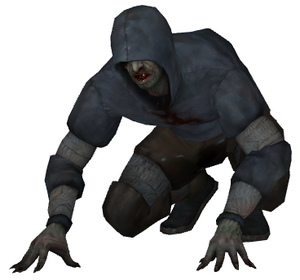 A Hunter crawling.
Add a photo to this gallery
Retrieved from "https://villains.fandom.com/wiki/Hunter_(Left_4_Dead)?oldid=4114748"
Community content is available under CC-BY-SA unless otherwise noted.