To ensure that no more babies are being delivered under any circumstances (failed).

To get rid of Junior and Tulip (failed).

Hunter is the main antagonist of the 2016 computer-animated Warner Bros. film Storks. He is the CEO of Cornerstone and the former father figure-turned-archenemy of Junior.

He was voiced by Kelsey Grammer, who also played Dr. Ivan Krank in Teacher's Pet: The Movie, Stinky Pete in Disney/Pixar's Toy Story 2, Sideshow Bob in The Simpsons and Harold Attinger in Transformers: Age of Extinction.

18 years before the beginning of the movie, storks used to produce human infants from the mystical "Baby Factory" and deliver to parents who requested them. But one stork, Jasper, went insane and tried to keep one of the babies, causing the infant girl's address beacon to be broken, so she couldn't be delivered. That moment made Hunter see that baby delivery was a false goal, and so he took over, shut down the Baby Factory and changed the stork's business to package delivery, thus creating the company Cornerstone. Since then, he wanted to keep the baby factor shutdown for good.

Hunter first appears as Junior, Cornerstone's top delivery stork, enters his office as ordered. Hunter explains that he's being promoted to chairman, and so he chooses Junior to take his place as boss, exciting Junior. However, he gives Junior a task to perform before he can take office: Fire the human employee Tulip, who was the baby that was failed to be delivered and who Hunter believes is too incompetent to continue working. Unfortunately, Junior didn't have it in him to fire her. So instead, he moved her to the letters department room (which has been defunct ever since the storks stopped delivering babies) where she'd be out of the way.

After realizing that Junior and Tulip had made an unauthorized baby girl, Hunter changes the delivery address in order to abduct her. Once Junior came by alone with the baby, as far as Hunter firing him, he also had an army of penguins tie him up like an infant and had her taken away from the human public.

During Stork-Con, while Hunter was making a speech about spherical boxes, he realized that Junior and Tulip broke into the facility while wearing a mascot costume. He attempted to persuade Junior into giving up the baby and let bygones be bygones. Upon refusal, Junior sent in millions of letters inside the machine and inadvertently made an uncountable amount of babies. Hunter tried to put a stop to baby deliveries for good by destroying the factory and killing every baby inside with a giant robot.

When the machine was stuck on a wiring outside the building, Hunter tried to escape, but thick wiring was blocking the emergency exit hatch, leaving him trapped inside the robot. Then, several small birds that he abused by playing golf over the years, stood on the machine, and caused it and the delivery service building to fall. As a final resort, he made an attempt to take Junior and Tulip down with him, but failed when Junior starts flying again. It's unknown whether Hunter survived the fall or not, but he never appeared for the rest of the movie. With Hunter and the package delivery factory gone, Junior was made the new boss and babies were delivered again. 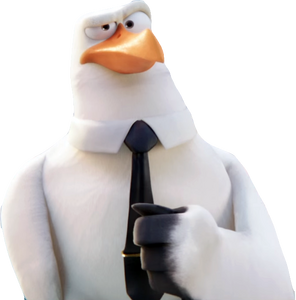 Hunter as he appears in the teaser. 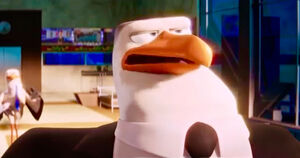 "Do you know why I built my office out of glass, even though birds can't see glass?" (Junior: I do not.)

"The peaks are when Tulip's on vacation, asleep or out with the flu. The valleys are when she tries to help."

"The only thing you need to do to be named boss on Monday is liberate the orphan Tulip. If I'm not being clear, I mean fire her!" 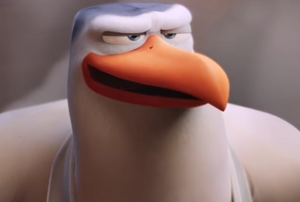 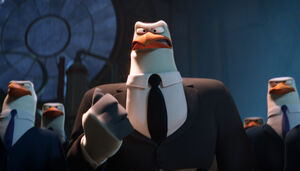 "That baby is dangerous!"

Hunter shocked at the baby factory getting powered up.

Hunter realizes that small birds will make him fall

Hunter plummeting thousands of meters below. 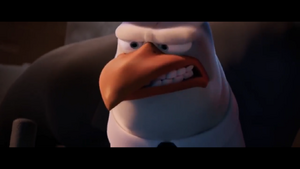