Hunt down and kill Mary and her unborn son (failed).

The Hunter is the main antagonist in the 2017 animated film The Star.

He is voiced by Lex Lang.

He first appears when the three wisemen arrive at the palace. When the wisemen tell King Herod about the new king, he feels threatened, and sends his head soldier to kill the newborn.

The soldier and the dogs appear as Bo and Dave try another escape.

Thaddeus and Rufus intimidate Bo into telling them after he says Mary's name, but the soldier lifts him, and the dogs sniff the bandage on his leg to catch the scent.

The two dogs, in the company of their master, then tracked Mary across the country, and finally found her in Bethlehem.

The soldier arrives and looks for the child, and repeats it. Bo tries to intervene, but Thaddeus flattens him on the ground.

Before the Soldier can implement his despicable goal, a flock of sheep and Felix, Cyrus, and Deborah attack, and send him, Thaddeus, and Rufus to the edge of the cliff, hanging on to each other. Bo tries to help Thaddeus and Rufus, hanging in the void as the chain is tied to the soldier, who takes off his two dogs and let them fall into the void without compassion, but they are saved by Bo, and the soldier falls to his death. 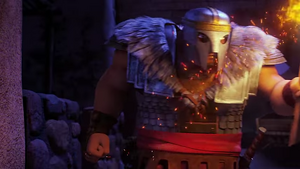 The Hunter searching for Mary and Joseph so he can kill them.
Add a photo to this gallery

Retrieved from "https://villains.fandom.com/wiki/Hunter_(The_Star)?oldid=2763472"
Community content is available under CC-BY-SA unless otherwise noted.