Find the identity of his archenemy the American Dragon and slay him.

Rid the Earth of all sorts of magical and supernatural creatures (all failed).

The Huntsman, also known as Huntsmaster, is the leader of The Huntsclan and the main antagonist of the Disney Channel animated series American Dragon: Jake Long. He is the archenemy of Jake Long and Rose.

He was voiced by Jeff Bennett, who also voiced Ace, Big Billy, and Grubber of The Gangreen Gang, Dick Hardly, and Major Man from The Powerpuff Girls.

The Huntsman (referred to as "Huntsmaster" by his subordinates) is the leader of the Huntsclan and the main antagonist of the series and Jake Long's main archenemy. He was also the original guardian and master of Rose. The Dragon Council rates him as the #4 threat to the magical community.

It is revealed in one episode that he is the monster he is today due to Jake's reckless usage of time travel. Whilst the Huntsman real name and earlier life is unknown, it is known twenty years ago, the Huntsman was a Huntsclan apprentice in his early teens, whilst very skilled, the apprentice's scrawny appearance and cracked voice resulted in him being bullied by other Huntsclan students and even the teachers.

When the Huntsclan intercepted Johnathan Long (Jake Long's future father) phone call revealing his girlfriend was a dragon (Jake's future mother, Susan) due to a time traveling Jake accidentally revealing the truth, the apprentice, who was determined to find acceptance among his peers, was assigned to capture Johnathan and bring him to the Huntsclan base.

He was intercepted by a time traveling Jake Long and after a fierce battle in the Huntsclan base, was knocked by a Jake into a pit imprisoning a feral dragon that had already killed two adult Huntsclan members (including his then Huntsmaster). The apprentice barely managed to survive, but was maimed and disfigured. When his peers mocked his near death experience, the now physically and mentally scarred apprentice scared them off with his now deep and spiteful voice. The former apprentice hatefully vowed he would hunt down and slay every dragon off the face of Earth no matter what it took.

Over the years, the former apprentice rose to become the Huntsmaster of the entire Huntsclan. Whilst monitoring hospitals for children with the Huntsclan mark, the Huntsman kidnapped a infant girl named Rose from her parents. Not only was Rose indoctrinated into the Huntsclan, but she was made his apprentice and made to think her biological parents had been murdered by dragons.

His ultimate clan was to gather all Aztec skulls and use them to wish for the death of all magical creatures. He forced his ward Rose, to go along with the plan, lest he kill her parents.

Despite capturing Jake, when the Huntsman started his wish for the death of all magical creatures, Rose unexpectedly betrayed him and knocked him out with a sneak attack, finishing the huntsman's wish by wishing for the death of all with the mark of the Huntsclan in a sacrificial effort. Following this, all members of the Huntsclan were carried kicking and screaming into the air by their glowing huntsman birthmarks then vaporized by lightning.

The Huntsman, unable to react to his impending doom due to his unconscious state was the last to be killed, his cape was the only remainder of his body.

The Huntsman's personality is menacing, callous, level-headed, and horrifyingly murderous, and he is seldom shown losing his temper or displaying strong emotions other than hatred. Due to a combination of Huntsclan upbringing and a traumatic experience, the Huntsman has a fierce hatred of magical creatures, viewing them as unnatural and desiring nothing less then their complete extinction. Whilst he is sometimes willing to enlist the help of magical beings, he plans to kill them later. For example, he enlisted the help of the Aztec serpent to find Jake and the Aztec Skulls, but once they were found, he killed the serpent, telling its smoldering body that its job was done.

He has an intimidating stature. His fighting skills are superb; he has impressive agility and acrobatic ability, as well as nearly superhuman strength and durability, even able to punch through a brick wall, another time was barely phased by being slammed headfirst through a metal elevator door, and even yanked the elevator pulley out with his bare hands in a fit of rage. He was consistently Jake's most fearsome opponent.

Nonetheless, he left most of the physical work to his apprentice, Huntsgirl, and limited his role in a fight to firing energy blasts with his staff weapon to test his apprentices. 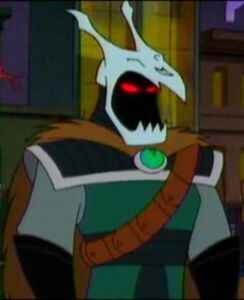