Killing others for blood.

Rid the streets of the scourge (formerly; failed).

Kill all in their way for their blood.

Huntsmen (collectively known as the Huntsmen Mob) were citizens of Yharnam that wander the streets in search of Beasts to slay, only to slowly become Beasts themselves. They are some of the first enemies found in Bloodborne.

Being in the earlier stages of the Scourge, the Huntsmen are still fairly human-looking, but their appearance changes slightly, growing hair in various places, their skin becoming dark grey and their eyes (at least those who do not cover their eyes in honor of Master Willem) become cloudy and feral.

They all wear different types of men's clothing typically found in Victorian England and Europe which have become tattered and dirty.

Due to the isolated nature of Yharnam on account of the scourge, the citizens of Yharnam are naturally superstitious of outsiders. Such behavior is enhanced by the infection, causing them to see all strangers as beasts and attack them mercilessly. They are also willing to cooperate, usually acting in a mob-like fashion.

Due to being under the earlier stages of infection, the Huntsmen do not have the advanced strength and speed most infected have, nor are they as coordinated as real hunters given their clouded, feral minds. They prefer to swarm people, using various tools they have on-hand (saws, sickles, torches, pitchforks, fire-arms, etc).

Due to the ancient blood used by the Healing Church, the population of Yharnam fell under what is known as the Scourge, a plague sweeping across the population where their thirst for blood drives them mad, turning them into literal beasts. Back when the night of the Scourge began, Gehrman the first hunter rallied citizens willing to act and began to kill Beasts every night in order to keep the citizens safe. Unfortunately, the scourge had already infected them as well, the thrill of the hunts and the bloodshed only making their infection even worse. Large Huntsmen are those in later stages of the infection, becoming larger and taking on wolf-like characteristics before becoming Beasts themselves.

Large Huntsmen are Huntsmen who are in later stages of the Scourge, becoming larger and taking wolf-like characteristics before becoming Beasts. They are also faster and stronger given their enhancements. They are incredibly tall, standing a few heads over normal human beings, their skin covered in fur and their faces taking on a wolf-like form. They still wear clothes, though given their grown form their clothes are small on them full of rips and tears.

Being infected by the scourge, the Large Huntsmen have an unquenchable thirst, driving to kill those around them. Clearly, they are partially gone, however, as they can be seen working with Huntsmen. However, while they cannot speak, they can use tools and wield torches, although the beast is antipathetic to fire. 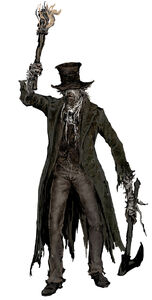 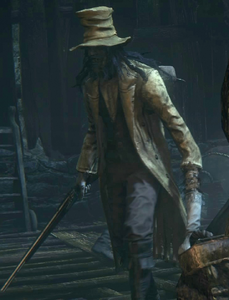 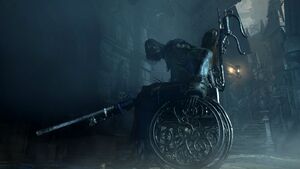 Huntsman in a wheelchair. 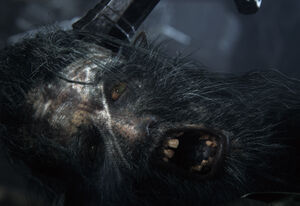 Huntsmen's face close-up.
Add a photo to this gallery

Retrieved from "https://villains.fandom.com/wiki/Huntsmen_(Bloodborne)?oldid=3521814"
Community content is available under CC-BY-SA unless otherwise noted.